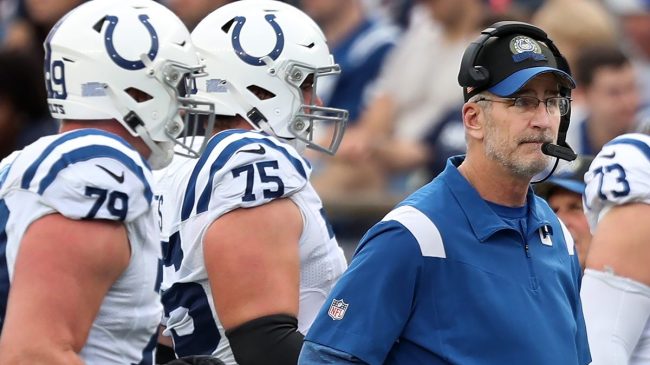 The Indianapolis Colts had no answers for the New England Patriots as they lost the game 26-3. After the game, Jim Irsay decided to let go of Frank Reich as head coach. Now, we may have found the true reason why, as Indianapolis supposedly knew the plays New England was running and still lost.

According to Mark Daniels at Mass Live, “multiple offensive players in the Patriots locker room could be overheard talking about Shaquille Leonard calling out their play calls. One Patriots starting offensive player said Leonard occasionally called out what the Patriots were going to do on certain plays, such as outside runs and screen passes.”

That’s a horrific look for the Colts, as Indianapolis struggled throughout that entire game. It’s not like the Patriots offense was much better though, as kicker Nick Folk contributed four made field goals on the day. New England’s offense has been a bit abysmal. However, the fact they won the game while their opponent knew their play calls is insane.

There is a multitude of reasons why the Colts fired Frank Reich in the middle of the season. However, if there’s any truth to this then this might have been the final straw for Jim Irsay.

Altogether, this is a bad look for both franchises. The Patriots are in some serious trouble if their opponents can easily call out their plays. Meanwhile, the Colts have to feel embarrassed to lose this game.

At the end of the day, Indianapolis is moving on with Jeff Saturday as the new head coach. We’ll see how it plays out, but Jim Irsay sure seems confident he can turn things around for the Colts this season. Additionally, look for New England to hopefully make adjustments to the offensive play calling.