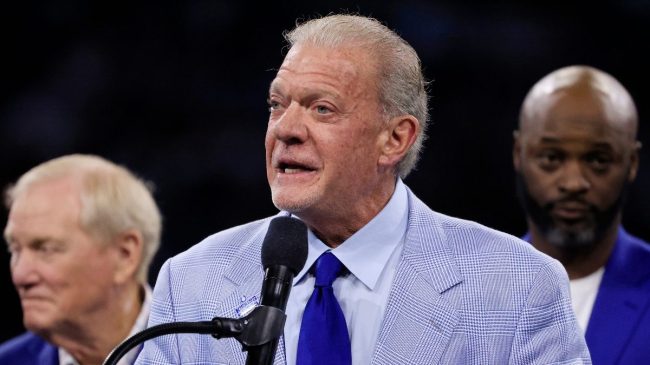 The Indianapolis Colts have hired Jeff Saturday as the new head coach and it feels like owner Jim Irsay is the only one excited about it. He held an interesting press conference introducing Saturday as he repeatedly made weird comments. We take a look at each one as Irsay’s words were truly bizarre.

Thanks to Tim and Friends, we now have a video clip focused on just Irsay’s comments. This compilation video of the press conference is hilariously weird. Give the full clip a watch below as the Colts’ owner introduces Jeff Saturday as the new head coach.

Colts owner Jim Irsay had one of the greatest press conferences of all-time 🤣 pic.twitter.com/9x02NBTKOk

Additionally, Jim Irsay makes it very clear he has no idea how to build rockets or how sausage is made. But dammit, he sure as hell knows how to build a football team. Let’s face it, the Colts haven’t won the AFC South since 2014. The franchise is 60-61-1 since the 2015 season (including this year’s record). If anything, they’ve been the most mid-franchise in the last eight seasons.

For that reason, Colts fans might be a tad worried about the decisions Jim Irsay is making right now. Especially considering he’s so adamant that Jeff Saturday is the man for the job. Rather than using background experience, it seems like Irsay is basing his hiring decision because he believes Saturday “has it.” Whatever that means.

It was a wildly bizarre press conference that was funny to nearly everyone except probably Colts fans. We’ll see how it plays out, as Jim Irsay’s brash decision will be tested in the back half of the 2022 season.