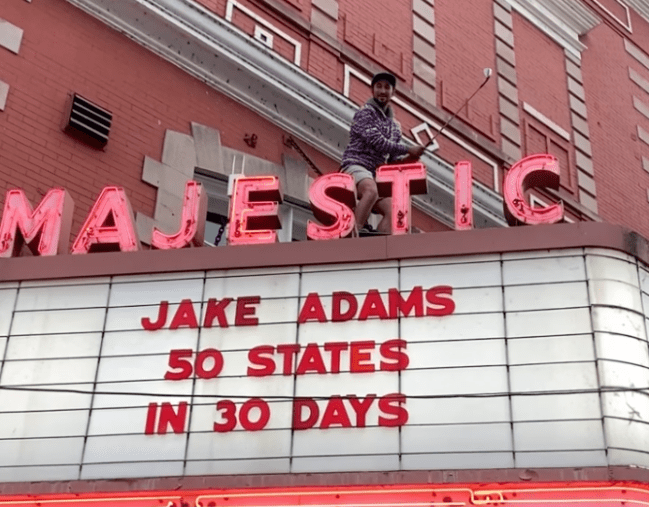 There are a lot of dumb challenges on the Internet these days as a new one seems to pop up every half hour. Comedian and golfer Jake Adams decided to embark on a self-appointed challenge of hitting a golf shot in all 50 states in just 30 days. I guess you could say this challenge falls in the ‘dumb’ category as well, but it’s also intriguing, and actually a legitimate challenge unlike the majority of the stuff we see trending all the time.

Adams originally announced this wild enterprise on April 1 as he began his journey by hitting a shot at the Hollywood sign in California. The shot itself was a strong one, it’s probably one of the better of the 50 shots he manages to hit, but even he knew this was a bad idea saying “seems like it’s going to be a pretty poor life choice” as things got underway.

You can check out each of his 50 swings on Adams’ Instagram, and as you can see in the full compilation video below Adams had himself quite a 30-day stretch hitting golf shots both around and directly at some rather well-known locations around the country.

The content here is fantastic, and I applaud him for pulling this off, but I do have a specific bone to pick with Adams here. What’s with the shot from Tennessee doing on a simulator? As a Tennessee native, I can confirm that there are golf courses in the state and pretty epic locations he could have sent a golf shot into orbit. It’s clear that Tennessee was the worst showcased state here and that’s embarrassing, I’m not going to lie.

Maybe the weather was bad during that day of travel and he only had one small window to hit a shot while driving through the state, but if that’s the case, how did he have time to find a simulator to hit a shot?

I don’t want to accuse Adams of anything, but maybe he actually skipped Tennessee altogether, threw some Tennessee course up on the simulator, and counted that as a shot. I may have just debunked this man’s entire challenge, but I do have to stand up for my home state here.