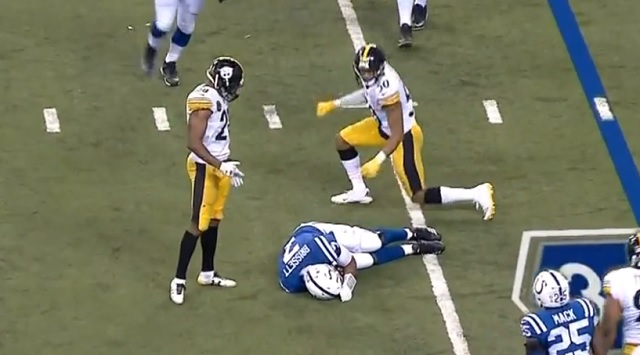 A concussion expert blasted the NFL this afternoon after Jacoby Brissett showed several signs of being concussed but was still allowed to return to the game.

Late in the third quarter of the Colts- Steelers game, the Colts quarterback appeared to go limp for several seconds after taking a brutal helmet-to-helmet hit.

Despite looking wobbly, Brissett was somehow allowed to continue playing when the Colts got the ball back on the next possession. After the game, the Colts announced Brissett “developed symptoms after the game” and was then put in the concussion protocol.

Chris Nowinski, co-founder and CEO of the Massachusetts-based Concussion Legacy Foundation, was watching the game and called out the NFL over their ridiculous concussion protocol.

#NFL #concussion protocol is a fraud. QB Jacoby Brissett goes back in after showing the clearest concussions signs of the season. Helmet-to-helmet hit, holds head, then goes limp, then needs help up. You don’t need a protocol to hold this player out for the game. Check the tape:

Mishandling of Jacoby Brissett’s obvious #concussion is a reminder that the “protocol” is based on an unethical #NFL philosophy: Keeping a healthy player out is far worse than putting a brain-injured player in. Rewrite & retrain staffs before someone dies

The NFL’s concussion protocol was already facing criticism this week after Seahawks QB Russell Wilson walked in and out of the medical tent and faked his concussion tests after he took a big hit during the team’s Sunday night football game.

The NFL needs to step back and protects its players before something serious happens on the field.