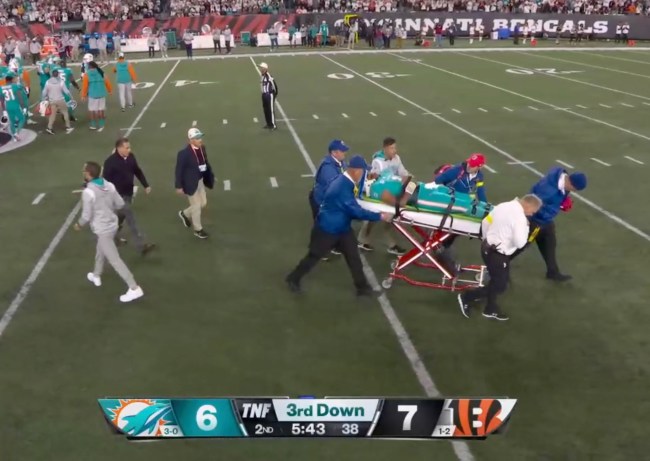 Update: The Miami Dolphins have confirmed in a tweet that quarterback Tua Tagovailoa has movement in all extremities and is being taken to the University of Cincinnati medical center.

Chris Nowinski, a Ph.D. and founding CEO of the Concussion Legacy Foundation said just hours prior to Tua Tagovailoa’s scary Thursday Night Football injury that him playing in the game against the Cincinnati Bengals would be a “massive step back” for the NFL.

“If Tua takes the field tonight, it’s a massive step back for #concussion care in the NFL,” Nowinski tweeted around 4:00 p.m. EST, just hours prior to the Thursday Night Football game between the defending AFC champion Bengals and AFC East-leading Dolphins.

“If he has a 2nd concussion that destroys his season or career, everyone involved will be sued and should lose their jobs, coaches included. We all saw it, even they must know this isn’t right.”

If Tua takes the field tonight, it's a massive step back for #concussion care in the NFL.

If he has a 2nd concussion that destroys his season or career, everyone involved will be sued & should lose their jobs, coaches included. We all saw it, even they must know this isn't right https://t.co/vxpaOif5rh

The Thursday Night Football injury to Tagovailoa came just days after the 24-year-old signal-caller was briefly knocked out of Sunday’s game against the Buffalo Bills.

While most NFL fans assumed that Tua suffered a head injury after seeing him wobble and have weak knees prior to exiting the game, the QB ultimately returned and has since maintained that his back was injured and not his head.

Despite an investigation launched by the NFLPA, NFL senior vice president Jeff Miller told the Washington Post in an interview on Wednesday that “every indication from our perspective is that [the concussion protocol] was [followed]” after Tua’s injury against the bills.