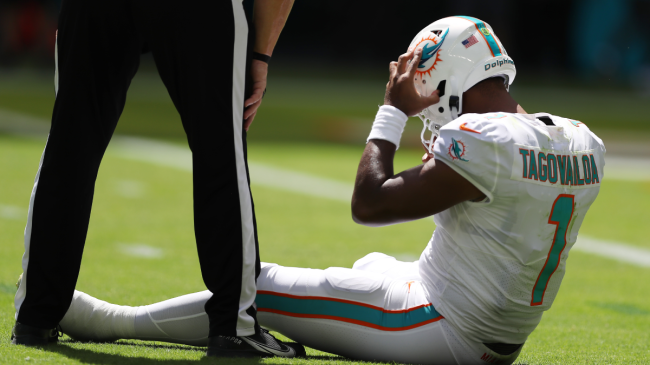 Tua Tagovailoa’s status for Thursday night’s matchup against the Bengals is still up in the air according to head coach Mike McDaniel. The Dolphins signal caller was injured in Sunday’s win over the Bills, and he now sees a quick turnaround with Miami playing on a short week.

That injury is under some scrutiny as many believed that Tua had suffered a head injury upon the initial look. Tagovailoa appeared to slam his head on the turf after being pushed to the ground by a Buffalo defender. When he rose to his feet, he was seen stumbling and falling to the ground, which led to a concussion protocol.

Doctors cleared the passer of any head injury, instead saying that it was back discomfort that led to the wobbly incident. Still, the NFLPA has now opened up their own investigation into the concussion protocol on the Miami sidelines to rule out any mismanagement.

Outside of that apparent head injury, it looks like Tagovailoa is dealing with back and ankle setbacks, too. Coach McDaniel commented on those injuries Monday with the game just a few days away.

McDaniel explained Tua’s outlook for the upcoming Bengals matchup, but his status remains unclear. Here’s what his head coach had to say about the possibility of playing on Thursday according to NFL reporter Cameron Wolfe.

Dolphins HC Mike McDaniel said Tua Tagovailoa’s back and ankle are feeling sore but still getting info from tests. McDaniel said it wasn’t out the norm of bumps & bruises that typically come after games, but he hasn’t done a Thursday game with Tua yet to say he can definitively play.

It’s encouraging to hear McDaniel say it wasn’t out of the norm of typical bumps and bruises. It’s also worth noting that Tua is not in concussion protocol this week, which would be the largest concern on this short week. Still, it’s a bit concerning seeing that he hasn’t been definitively ruled as the starter.

If Tagovailoa can play, it will give Miami its best chance to move to 4-0 on the year.