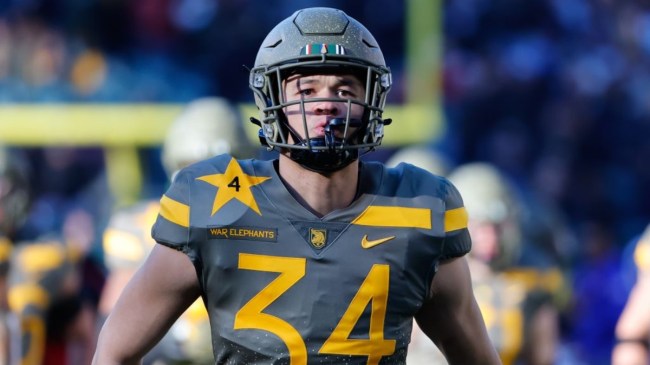 When football players begin their college careers, most do so with the hope that one day they’ll be able to continue that career in the NFL.

Unfortunately, it seems one player might now have that opportunity taken away because of where he chose to play in college.

Army’s Andre Carter II has been projected as a prospect who will be drafted in the first 2 rounds of the 2023 NFL Draft. Congress’ passing of the National Defense Authorization Act appears like it will change that.

A section in the bill has made it a breach of service obligation to compete in professional sports, which could mean Carter will have to join the military after this season instead of playing in the NFL.

News: Army’s Andre Carter was poised to be Army’s highest draft pick in a half century. A Bill passed by Congress yesterday now significantly complicates his NFL future. https://t.co/cSKl92nssH

Carter’s mom talked to ESPN and revealed the disappointment she is feeling about her son’s opportunity potentially being taken away.

Here’s the thing that’s so painful. You guide your son to do the right things because it’s right. And it’s really disappointing that it’s not reciprocated. This has been his goal since childhood, to go into the NFL. Every step of the way, that was on track, until we saw this article. That’s the part that’s disappointing. It’s not surprising to see so many people transfer, opt out or switch teams. When loyalty is not reciprocated, that stings.

His coach at Army also expressed his frustration with how the rule will impact Carter.

It’s just kind of pulling the rug out from under him. It’s not fair. It’s not fair to him. He was loyal to this team and institution. He could have left and he didn’t. He still wants to serve. It’s not that he doesn’t want to serve. He wants to pursue the NFL and play, and then serve.

This was a completely unnecessary inclusion in this bill and is really just a ridiculous rule for Congress to put in place.

Nobody seemed to mind the service academies having high-level athletes on their teams when Air Force and Army were competing for Top 25 rankings and bowl game wins over Power 5 schools. It was good publicity for the academies and the few prospects they were losing wasn’t exactly hurting the military.

Now this player will be penalized for a rule that didn’t exist when he enrolled and came into effect at the end of his time at the school.

It’s also ridiculous that he for him to not be able to defer his service. Waiting to play in the NFL is a much bigger detriment to him than waiting to join the military is to this country. It will be very difficult for him to secure a spot in the league when his required service is finished.

I hope the service academies enjoyed their recent years of success in college football because they won’t have many more if Carter isn’t able to compete in the NFL because they’ll lose the ability to attract anybody with the hopes of playing at the next level.