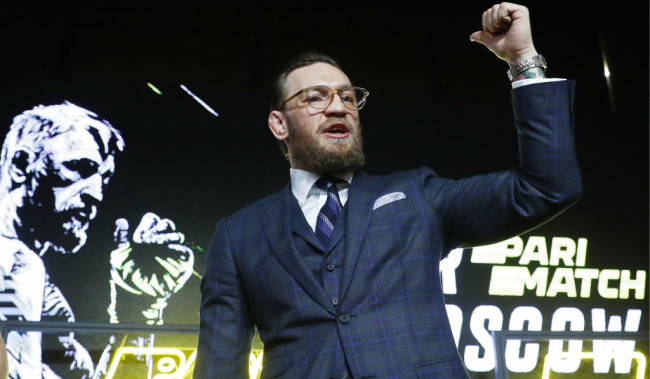 While it’s been over a year since we last saw Conor McGregor in the UFC, that doesn’t mean he’s gone anywhere, as the notorious Irishman has remained as outspoken as ever in the 12 months following his defeat to Khabib Nurmagomedov.

Despite the fact that McGregor’s most recent bout ended in defeat, the 31-year-old former featherweight and lightweight champion has continued to be as controversial and confrontational as ever.

In addition to constantly stating his desire for a rematch with Khabib, McGregor — speaking at an MMA event in Moscow — also recently said that he would like to fight 50 Cent as well.

“I’d have to probably say 50 Cent, I’d like to fight him. Throughout the course of the Floyd Mayweather build-up I used him as a tool, a promotional tool on the free also, I knew he was linked to Floyd so I tied him in also and he responded big time and capitalised on that audience so I was very thankful,” McGregor began.

“But then after that he began a little tirade against me on social media, particularly Instagram where he’d make these memes about me constantly. Every time I’d go onto the internet I’d see 50 Cent had posted up some new stupid meme and I wrote on one of the memes – old man on the internet making memes – and then he blocked me.”

“So he’s had to block me, and I still see sometimes, I still get tagged in other people saying he’s saying this and he’s saying that. So I’d like to have a knock-off with 50 yeah, so if you’re listening 50, let’s get it going bud,” McGregor said.

Given McGregor’s last highly-profitable venture into the realm of “celebrity” boxing, it should come as no surprise that he’s more than willing to get into a ring with 50 Cent.

McGregor, who has not fought in the UFC since his October 6, 2018 loss to Khabib Nurmagomedov, is set to return to the Octagon on January 18, 2020, in Las Vegas.