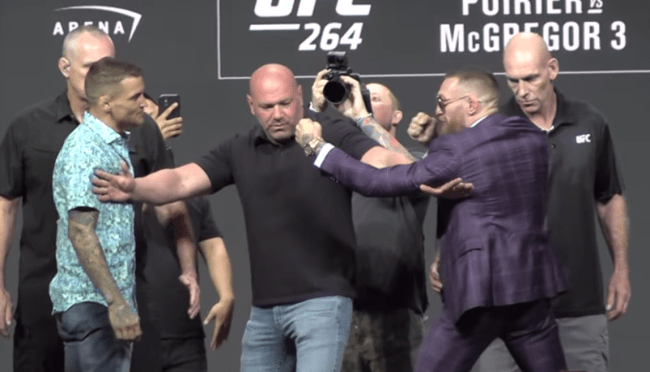 Conor McGregor is getting extremely personal while trying to get into Dustin Poirier’s head before their fight at UFC 264 this weekend.

Earlier this week, McGregor posted a screenshot that showed Dustin’s wife Jolie had once sent him a DM on Instagram.

After people questioned if the DM request from Poirier’s wife was photoshopped, McGregor uploaded a video to prove that it was the real deal.

Poirier would later take to Twitter to take a shot at McGregor’s weak trash talk before the fight.

Your trash talk is as thin as your hair these days! See ya soon champ champ

McGregor fired back by making a lewd comment about Poirier’s wife.

Your wife wants to see the hair around my dick and balls bro. See what that’s like. It’s real the message request mate, no trash talk. Man to man, it’s fucked up! I seen your interview with Mike you think it was fake. It’s not.
Have a think on it in the sauna anyway.

It seems like the McGregor-Poirier rivalry is getting heated at just the right time.

A lot has happened since the last time @TheNotoriousMMA and @DustinPoirier fought. #UFC264 will be TENSE!@dannyshap breaks down the beef: https://t.co/3tNRNluZSu