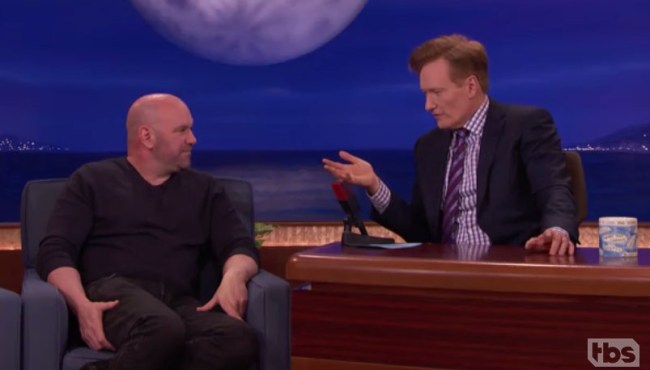 Well, this is very good news. UFC President Dana White, who has reportedly been one of the people throwing monkey wrenches into the plans for a Conor McGregor vs. Floyd Mayweather fight, now says he believes with great certainly that it will happen.

Appearing on Conan Wednesday night, White was asked about the potential megafight between McGregor and Mayweather and he said what we all want to hear…

“I do think it’s gonna happen. I think it’s going to be a tough deal, because obviously … a lot of egos involved in this deal and a lot of people, so that always makes it tougher. On the flip side, there’s so much money involved. I just don’t see how it doesn’t happen.”

The problem seems to be how that money is going to be split up, as well as how much the UFC gets in order to let McGregor fight outside of his contract.

“Conor McGregor is huge. He’s 27 years old. He’s in the prime of his career. Floyd is 40. Floyd has always had a problem with southpaws. Conor is a southpaw. And Conor hits hard. When he hits people, they go. Floyd’s definitely not knocking him out, that’s for sure. I’m not saying that Conor would win this boxing match, but it sure makes it interesting.”

So does this mean the date and venue that have reportedly already been booked for the fight is legit? At this point, who the hell knows, but at least we know White seems to be fully on board with it. Now, after what Mayweather said over the weekend, it just seems the only person we’re waiting on now is “The Notorious One” himself.