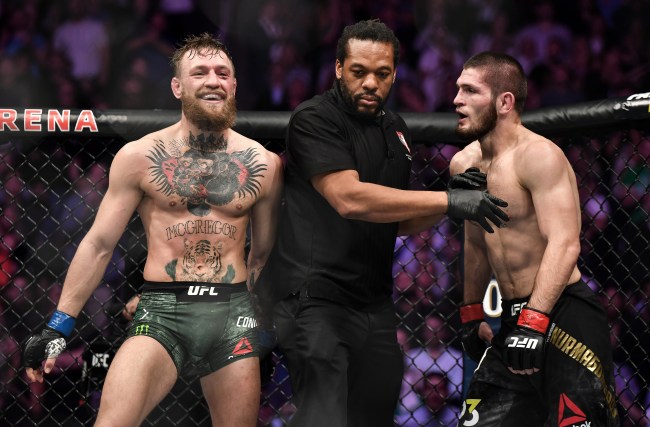 Conor McGregor is back and UFC President Dana White already has his next opponent lined up.

On Saturday night, McGregor made quick work of Donald ‘Cowboy’ Cerrone with an impressive showing in his first fight in over a year.

Dana White is all about a Conor McGregor vs. Khabib Nurmagomedov rematch after #UFC246: “It’s the biggest fight in the sport’s history.” pic.twitter.com/SJFNhGpl7N

“There’s always somebody fun that can match up with Conor and everybody wants to fight Conor. Everybody’s wanted to fight Conor for the last however many years. When you look at what makes sense, we’re at a place where Conor was saying going into the Khabib fight, he had a lot of personal stuff. Some stuff self-inflicted, he had injuries and he had all these things going on, and he has been obsessed with getting that rematch, because he knows that he wasn’t 100 percent right,”

After tonight and with how Khabib won the fight the first time and how famous Khabib has become since that first fight, we’re looking at (Marvin) Hagler-(Tommy) Hearns. (Muhammad) Ali-(George) Foreman. Ali-(Joe) Frazier. This is a massive fight with global appeal. It’s the fight that you make. (McGregor vs. Nurmagomedov) is the fight that makes sense. It’s the fight for the 155-pound title.”

Considering Khabib-Conor 1 sold a record high of 2.4 million PPV buys it’s obvious why the UFC would be interested in making that fight next.

Unfortunately, Conor will most likely have to wait until the end of the year to fight Khabib because Nurmagomedov has a big fight against Tony Ferguson in April 19th.