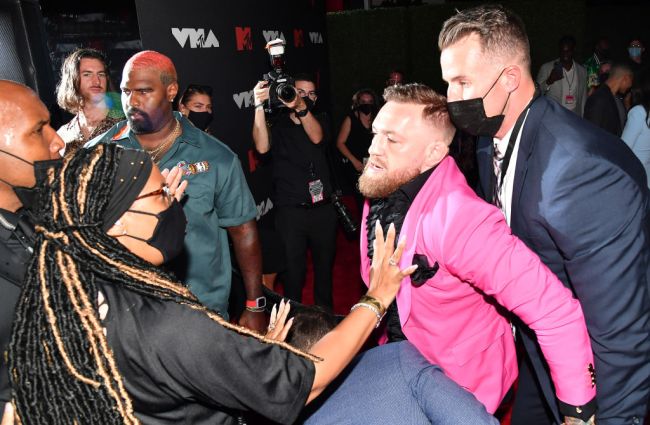 We now know why Conor McGregor is angry at Machine Gun Kelly.

On Sunday, videos of McGregor trying to attack the rapper at the VMAs surfaced on the Internet.

Conor McGregor out here trying to fight Machine gun Kelly after he denied to take a picture with him 🤣🤣🤣🤣🤣😭😭😭😭😭 #VMAs #ConorMcGregor #MGK pic.twitter.com/qXnfvCHWCa

According to TMZ, McGregor asked MGK for a photo, and when he was denied he started throwing a fit.

Sources connected to the situation tell us Conor asked MGK for a photo, which Kelly denied … and that apparently escalated into him pushing Conor, whom we’re told stumbled back and spilled his drink.

When he collected himself and whatever was left of his drink, our sources say Conor allegedly chucked the drink at Kelly … as well as Megan, whom we’re told was nearby.
Their respective teams broke it up before things got really ugly — and Conor was given his walking cane back — something that had fallen to the ground during the scuffle. FYI … Conor made it inside after this — the camera just panned over him during the broadcast.

"Conor McGregor did not ask anyone for a picture, nor did he instigate this incident. He does not know Machine Gun Kelly, outside of the fact that he attended Conor's fight this past July."https://t.co/EI1Z84JLTa