Conor McGregor Is Launching His Own Brand Of Irish Whiskey 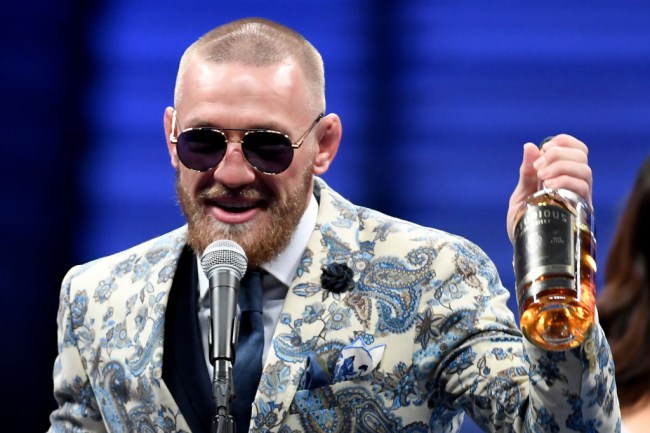 Conor McGregor might have lost to Floyd Mayweather in their much-anticipated bout on Saturday night, but that didn’t stop the Irishman from partying like he’d walked away with the victory. I guess when you make $30 million for 30 minutes in the ring, you’re allowed to celebrate a bit.

McGregor kicked off his post-fight festivities at the podium when he bought a bottle of his own signature whiskey out with him. The master of self-promotion plugged the brand— which is called Notorious— multiple times over the course of his press conference, and said that it was only matter of time before bottles started hitting the shelves:

“I’m going to take over the Irish whiskey market – and this is delicious! Boy that whiskey tastes so good. Oh shit. Keep an eye out for it.”

This won’t be the first brand that McGregor has launched. He also owns a clothing line called August McGregor and has landed multiple sponsorship deals— including one that resulted in a ridiculous ad for a toothpaste company.

A drink expert at the Independent said that McGregor could earn $100 million or more if he plays his cards right, but that the success of the brand would be contingent the quality of the whiskey:

“There are more celebrities attempting to strike it rich in the drinks industry than ever before, and while a famous name can shift bottles, at the end of the day it’s all about the taste. There is certainly money to be made – take the sale of George Clooney’s tequila firm Casamigos for $1bn, for example – but once the Mayweather fight hype fades, will McGregor’s notoriety be enough to sustain sales, and more importantly – will his whiskey taste any good?”

I can only hope we get to find out for ourselves sooner rather than later.