Despite Being Hammered By Floyd Mayweather, Conor McGregor Celebrates With Fans At After-Party 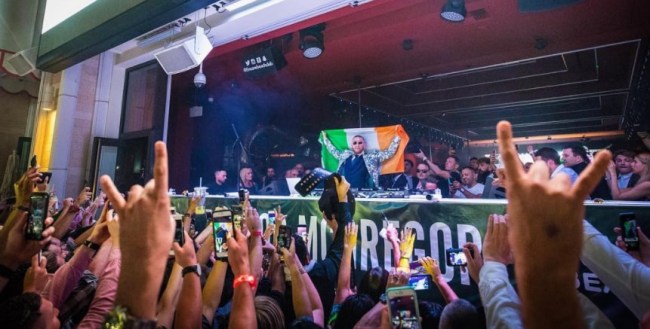 Conor McGregor, the mixed martial artist and amateur boxer until Saturday night, put up quite a fight against undefeated professional boxer Floyd Mayweather. However, Conor lacked the accuracy, expertise, and stamina that the other-worldly Mayweather possesses. McGregor was on his heels and punch drunk when the superfight was called in the 10th round. Despite being smashed in the face by several brutal right punches from Mayweather and suffering a tough loss, Conor greeted his adoring fans at an after-party only hours after battling Money Mayweather.

McGregor received a hero’s welcome by more than 2,000 fans at a sold-out after-fight party. McGregor partied with his fans at the Encore Beach Club inside the Wynn on the Las Vegas Strip. The 29-year-old Irish fighter arrived around 3 a.m. on Sunday morning dressed in his usual eccentric suit and sunglasses to hide the damage that Mayweather had inflicted on his eyes.

While holding a vodka and orange, McGregor told the crowd, “You’ll never beat the Irish.” Later, Conor instructed his devoted followers to “have a whiskey,” as he held a bottle of his own ‘Notorious’ whiskey. Conor’s fans paid $200 to be in the presence of their hero and drink expensive alcohol. I’m sure they were happy to oblige. McGregor allegedly paid more than $100,000 so his entourage could drink on his tab and party in private cabanas.

Imagine what he'd have been like if he'd won. Crowd going wild for Conor McGregor at his Vegas after-party #MayweatherMcGregor pic.twitter.com/WujxXyXVXA

Here's the drinks menu inside the Conor McGregor after-party. I opted for a cheeky $125k bottle of the Dom Perignon Rose Gold … pic.twitter.com/wB9vLNPyGy