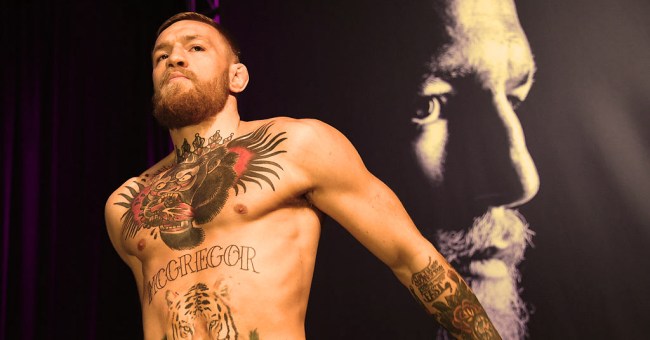 It looks like Conor McGregor may be in a bit of trouble with law after he and his team attacked a bus filled with several UFC fighters who were leaving a press event at the Barclays center.

Via Ariel Helwani of MMAFIGHTING.COM

Conor McGregor and members of his team showed up at the Barclays Center at the very end of media day moments ago. There was an altercation with some of the departing fighters who are competing on the card.

I’m told that chairs were thrown through the van window and one passenger on the van was injured.

I’m told from people who were in the van that as the van was driving off, they started banging on the windows before security broke it all up.

I’ve seen video shot by fighters in the van. Very clear Conor is telling someone to get out of the van before being pulled away by security. Khabib and his team were in that particular van.

I’m told some of the fighters who were on the van are “shaken up.” They are still at the arena and Dana White, as well as local authorities, are there now.

According to multiple sources Michael Chiesa suffered a laceration in the fracas. He is being attended to at the arena. Unclear at this time how serious his injury is.

Here’s video of McGregor smashing the van window with a dolly.

This altercation comes just a few days after Conor’s good friend and training partner, Artem Lobov, got into a heated confrontation with Khabib Nurmagomedov Tuesday at the UFC fighters’ hotel.

As for why this happened today, I’m told from multiple sources with knowledge that the motive was “retaliation” after Khabib Nurmagomedov and his team confronted Artem Lobov, one of Conor McGregor’s teammates and best friends, earlier this week.

Update: Conor McGregor has turned himself in to the police.

Conor McGregor is currently in police custody, per NYPD. Charges pending. He turned himself earlier this evening.

Breaking: Conor McGregor is in custody at the NYPD 78th precinct where he's expected to be charged with assault. (via NBC News) pic.twitter.com/x9sJk2Mq0u