Conor McGregor Got Savagely, And Creatively, Trolled By Fans For His Tweet About The Loss To Khabib 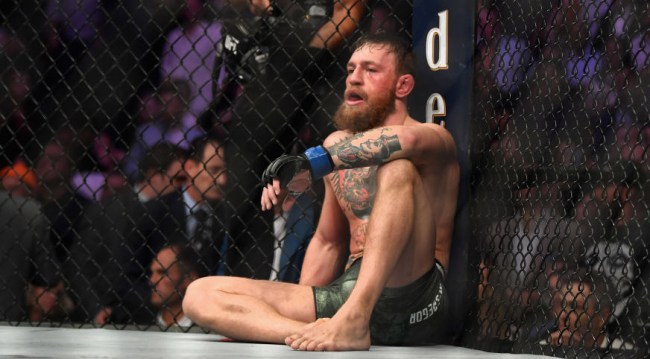 After being throroughly dominated during his UFC Lightweight Championship fight versus Khabib Nurmagomedov at UFC 229 in Las Vegas, Conor McGregor took to social media on Monday to show off his nice shiner and write a confusing message of… inspiration?

McGregor wrote, “We lost the match but won the battle. The war goes on.”

Seriously, that’s not an actual phrase, right? I’ve heard of someone “losing the battle, but winning the war,” but McGregor didn’t win dick on Saturday.

We lost the match but won the battle.
The war goes on. pic.twitter.com/CRtPaGfOnn

Unfortunately, for McGregor this nonsensical quote was distrubuted to his 7.5 million Twitter followers and 28 million followers on Instagram. And despite receiving around 4.8 million likes on Instagram and 25K on Twitter, many fans were not having it, trolling him right into oblivion.

Won the battle!! Are you sure? 😂😂😂
Bro fix your nose 😂😂😂 pic.twitter.com/nAAKIFPEAi

Absolutely! you won the battle of tapping pic.twitter.com/AKP5DuA1gx

What ever did we do for entertainment before social media? How did live without knowing what our favorite athletes and celebrities were thinking at any given moment? Such neanderthals we were.