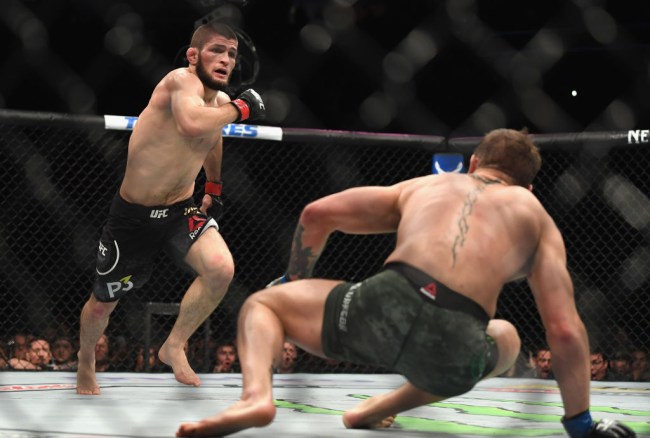 Conor McGregor’s two-year hiatus from the octagon was evident in a fourth round tap out at the hands of undefeated Russian fighter, Khabib Nurmagomedov. McGregor was the first fighter to officially win a round against Nurmagomedov, but aside from that, there was not much to celebrate for McGregor’s camp, who saw their guy get meticulously dismantled before tapping from a neck crank.

McGregor’s superpower is his ability to amp up the drama before matches using his mouth as his weapon. We saw it before UFC 202 when he hummed a water bottle at Nate Diaz. We saw it when he acted like a certified crazy person at weigh-ins before the Mayweather boxing fight. Most of McGregor’s antic could be classified as pure showmanship, but before the fight with Nurmagomedov, McGregor’s vitriol seemed malicious. He called Khabib’s manager, Ali Abdelaziz, a “terrorist snitch” for reportedly abandoning his son when he started as an informant for the NYPD and who he is $50k behind in child support for.

The bad blood spilled over into a post-fight melee that has flooded your timelines for two days now. Reports have surfaced that the Nevada State Athletic Commission has withheld Khabib’s payment after he decided to hop the fence to confront McGregor’s teammate after the fight. Conor has reportedly been paid in full.

‘The Eagle’ is relishing in his victory against the sports most popular figure, and took to Instagram to rub salt in McGregor’s many wounds.

“My brother, even though you’re slowing down now, or else I’m uncomfortable for you, I told you that on October 6, I would say everything or did you actually think you could beat me in there?

“I apologize to everyone I offended in our common victory, and to my sincere fans – you are my universe.

“Thank you for your incredible support, I love you, sincerely yours – Khabib Nurmagomedov.”

In response, McGregor posted this:

For the life of me, I can’t figure out what that caption means. But hopefully, we won’t need to look into Conor’s words for long, as UFC President Dana White has just confirmed that Conor McGregor already wants a rematch with Khabib. You think Drake will root for Khabib this time around? Asking the hard questions.