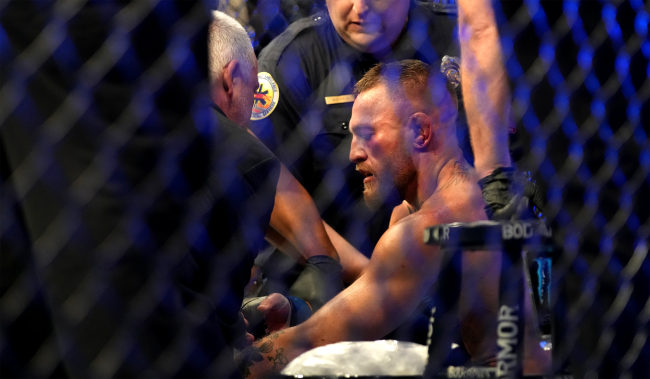 UFC star Conor McGregor is currently recovering from a nasty broken leg suffered in his fight against Dustin Poirier at UFC 264.

The “champ-champ” had to undergo surgery to repair fractures in his tibia and fibula fracture, but that doesn’t mean he isn’t going to fight before his leg heals. It will just be in a wheelchair.

McGregor will participate in a wheelchair boxing match on September 11th in Galway, Ireland against comedian Al Foran.

The unusual fight between McGregor and Foran, which was originally supposed to be a standard boxing match, will benefit the Irish Wheelchair Association.

Please donate here if you can: https://t.co/lDMJxs1MvE

“Conor had volunteered to be the co-main event where he was gonna box, there’s a guy called Al Foran who is an impressionist,” McGregor’s coach John Kavanagh said, according to LowKick MMA. “You might have seen him do some of Conor’s impressions. So Conor’s gonna fight Conor in the co-main event.

“He’s been main event for a couple years now,” Kavanagh added. “But anyway in the heat of all this he just turned and went, ‘You know, I’m gonna do the wheelchair boxing fight now’. Because, he’s off his feet for a while. He made a joke about that.”

McGregor recently ran into another big name athlete while rehabbing his broken leg, Atlanta Braves superstar Ronald Acuna, Jr., who is working his way back from a torn ACL suffered on the very same weekend that McGregor injured his leg.

Conor now says that September is too early. But he still wants this to go down. We shall see.

Guys, the September date is too early for me. I am still in recovery. My docs/physical therapy team out here advice me to stay. I reckon late October at earliest. But maybe November/December too. It is hard to say at this time a concrete date. But I’m in! Wait for me please! 🥊