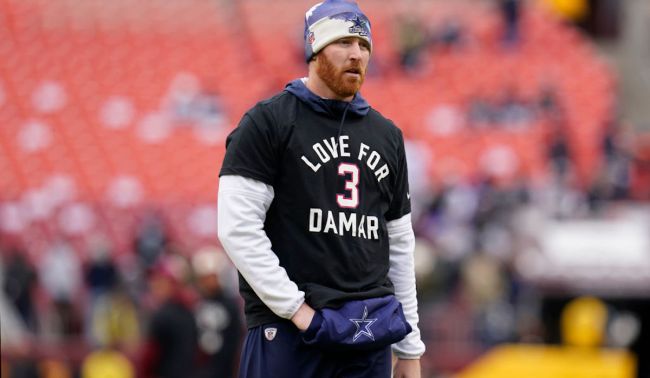 Following the Dallas Cowboys’ pitiful 19-12 loss to the San Francisco 49ers on Sunday, the sports world immediately began to debate whether or not backup signal-caller Cooper Rush could’ve won the game if he was playing.

In the NFC Divisional round matchup against the Niners, Prescott completed 23 of 37 passes for 206 yards, one touchdown, and two crucial interceptions.

As a result of his subpar performance, football fans immediately began to discuss whether or not Rush — who went 4-1 as the Cowboys’ starter this year while completing 58% of his passes for 1,051 yards, five touchdowns, and three interceptions — would’ve been able to lead the Cowboys to victory.

Dak really getting paid $160M to do what Cooper Rush can do for $2M.

Well it’s another year we should have played Cooper Rush the first half and then dak.

Tons of Cowboys fans seem to be turning on Prescott following his difficult season:

Dak is middle tier at best. Definitely not worth his contract. I had more fun watching Cooper Rush this season. Nothing but excuses.

Trade him, save money and start Cooper Rush. pic.twitter.com/59oU5wia0Y

Dak is better than Cooper Rush. BUT THAT WAS EXACTLY THE KIND OF GAME COOPER RUSH WOULD'VE WON. NOW, HE'LL BE SOMEONE ELSE'S STARTING QB.

Cooper Rush did this better though… not saying he a better QB but he played his role hit Zeke and live with the results….. but idk how many times Dak has gotten pick off on this play this season… shouldve thrown this in the garbage a long time ago.. run crossers https://t.co/JDynvwUHID pic.twitter.com/3Ws3NJXiV1

As a result of their NFC Divisional Round win over the Dallas Cowboys, the San Francisco 49ers will head east to take on the #1 seed Philadelphia Eagles in next weekend’s NFC Championship game.

Over on the AFC side of the NFL playoffs, the Cincinnati Bengals will be heading to Kansas City to take on the Chiefs in a rematch of last year’s AFC Championship game.

According to the sportsbooks, virtually all of the remaining contenders have a chance to win the Super Bowl, as each of the four teams currently has odds of about +250 to lift the Lombardi Trophy.