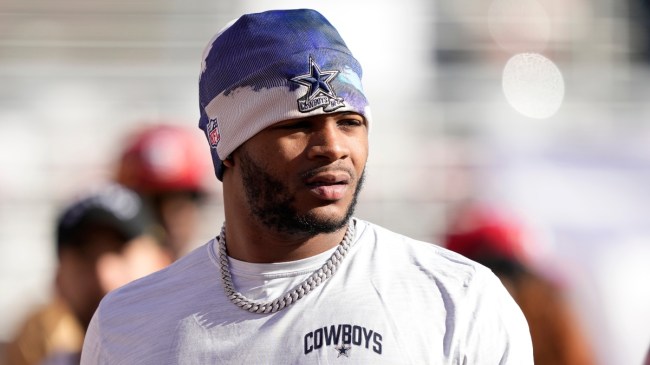 The San Francisco 49ers found a way to hold off the Dallas Cowboys and move on in the NFL playoffs.

After the game, Deebo Samuel responded to a comment Micah Parsons made leading up to the contest. The Cowboys star didn’t take to it too lightly.

Jomboy Media shares the exchange. In the moments leading up to the game, Parsons claimed that matchup against the 49ers was “who I wanted.” Samuel had a perfect response, which led to the Cowboys star calling him out.

However, it’s kind of odd for Parsons to even say that. Sure, Samuel wasn’t that big of a help in the 49ers’ win. He only contributed 45 yards off of four receptions. Meanwhile, Micah Parsons finished the game with one solo tackle and three assisted tackles. No sacks, no turnovers, nothing. He did make some strong plays that aren’t seen on the stat sheet though, like this one here.

Micah Parsons won’t be credited for that sack, but he should be. Incredibly smart football by #11 of the Cowboys. pic.twitter.com/Zt8CZnGtPw

If anything, Micah Parsons comes off as incredibly salty. And who can really blame him? The Cowboys fell flat in a winnable matchup. The 49ers just happened to play a cleaner game throughout and earned the victory. Overall, the better team won on Sunday night.

Now, Dallas has an interesting offseason ahead.