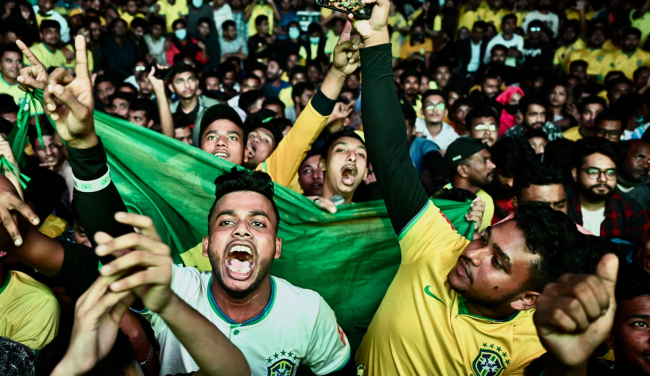 Weg, dubbed “the hottest World Cup fan” by some fans and websites, has ties to both countries.

While the Brazilian used to be a cop in her home land, she also is the great-granddaughter of German immigrants.

The reason for her unusual offer if Brazil defeats Germany in the World Cup final on Dec. 18 is due to some history between the teams.

In the 2014 World Cup, the two countries met in the finals in a match where Germany went on to rout the Brazilian National Team 7-1.

“From the beginning, I wanted to represent Germany in the competition, but I was afraid of criticism for the 7-1 result,” said Weg.

“That game was hard to swallow, right? So, I started with the mission to erase that, because I’m Brazilian and I’m divided, right?

“I’m the great-granddaughter of Germans. All my family is from there, but I don’t want to celebrate a thrashing.”

She added, “Those who are on my OnlyFans don’t even remember that thrashing by Germany [laughs]. There, the rivalry is sidelined. And, if the final is [between] Brazil and Germany, there will be nudes for free.”

Tati Weg is currently competing with other fans in a World Cup Beauty contest. Weg is representing Germany, but she’s got her hands full after former Miss Croatia Ivana Knoll went viral on Sunday after risking being arrested in Qatar for her outfit.

Weg, who has over 154,000 followers on TikTok and another 109,000 on Instagram, was previously an officer in Brazil’s preventive military police force for 10 years.

According to a report by the New York Post back in March, Weg told her Instagram followers, “It’s not about being better or worse in any way. But that I’ve been where I wanted to be in the past. And I’m where I want to be today. This is success.”

She also says that she “applied for a license to practice law,” but for now she’s just happy doing her OnlyFans account.