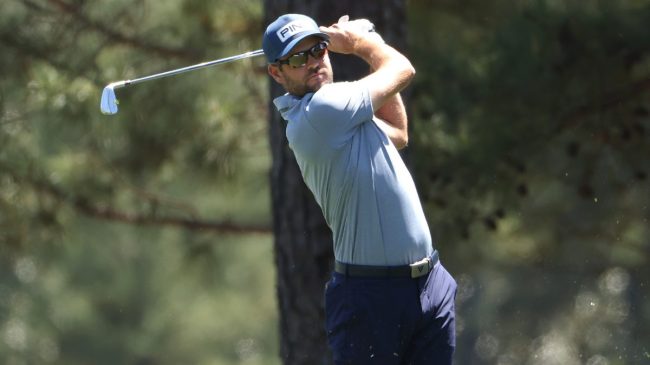 Golfer Corey Conners is having himself quite the week.

The Canadian is fresh off of a top 10 finish in Augusta, rounding out his Masters weekend in a tie for sixth place. Conners shot two-under par on the final day of the tournament to close at three-under for the week. It was his third-straight top 10 finish at Augusta National.

He showed off an impressive short game throughout his time in Georgia.

Corey Conners moves within two of the lead. #themasters pic.twitter.com/tGBy0kjj5P

Typically, there could be a bit of a hangover coming off the highs of great performance at golf’s most prestigious event.

He’s picked up right where he left off in Augusta, moving on to play in the RBC Heritage tournament down in Hilton Head, South Carolina.

Corey Conners Sinks A Hole In One At The RBC Heritage

Not only has Conners been one of the top performers of the opening round, he also boasts the shot of the day. Conners struck his shot from the seventh tee absolutely perfectly, sinking an ace from 187 yards out.

🚨 ACE ALERT 🚨@CoreConn rolls it in perfectly at the 187-yard 7th! pic.twitter.com/wzJZKLZuNS

He couldn’t have hit that any better.

The ball takes one big hop before trickling down the green and into the cup. He nonchalantly walks off the incredible shot, giving just a fist pump and a high five to his caddie.

Conners hopes that the string of excellent play continues over the next three rounds of the weekend. As it stands, he sits at five-under par and in a tie for third place with six other golfers. He’s currently three strokes back of leader Cameron Young.

Second round action kicks off on Friday.