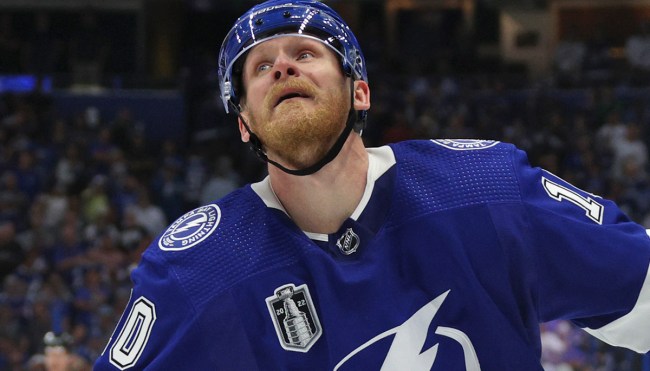 It’s hard to feel too bad for the Lightning and their fans after Tampa Bay came up short in its quest for a three-peat when the Avalanche earned the right to raise the Stanley Cup thanks to their 2-1 win in Game 6 of the Finals on Sunday.

Does the loss still sting? Sure, but there was no shame in losing to a Colorado squad that dominated the entire season, and the fact that the Lightning headed into the year as back-to-back champions has to soften the blow at least a little bit—unless you’re Corey Perry.

The veteran forward opted to harness the “if you can’t beat ’em, join ’em” mentality when he signed a two-year deal with the Lightning last summer.

Perry was a member of the Stars team that was vanquished by Tampa in the Stanley Cup Finals in 2020 and found himself at the losing end of the championship series yet again after joining the Canadiens squad that was bested by the Bolts in 2021, and he acknowledged winning a title was his primary goal upon inking the new contract.

Based on recent history, signing with the Lightning seemed like a pretty good bet. Unfortunately, they were ultimately no match for the Avalanche, and now, Perry holds the distinction of being the first player in NHL history to play for three different teams who managed to lose in the Stanley Cup Finals three years in a row.

The wrong kind of history 😳

It didn’t take long for NHL fans to chime in with some similar reactions after that stat started to make the rounds.

corey perry trying to enter the avs locker room to negotiate himself a contract for next season: pic.twitter.com/lxg05p5jVL

Corey Perry making his way to a new team that will lose in the Stanley Cup Finals pic.twitter.com/Gdr0aOu7YF

Perry can take some solace in knowing he’ll always be able to call himself a “Stanley Cup champion” after winning as a member of the Ducks in 2007, but that probably doesn’t make the last three years any less frustrating for a 37-year-old who knows the clock is ticking when it comes to the time he has left in the league.