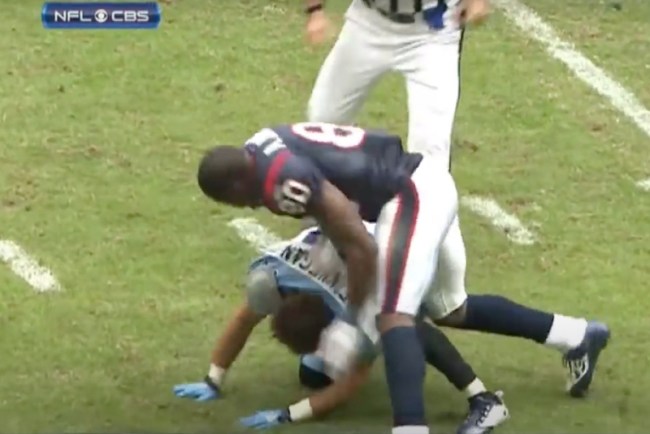 Living in Nashville during those glory years for the Tennessee Titans, I remember how Cortland Finnegan would absolutely pester opposing players. The former Pro Bowl cornerback would chirp, tug on jerseys, continue to talk crap and just do anything he could to physically and mentally break the other team’s top receiver down. It often worked, but it absolutely cost Finnegan at times.

One of those instances came in a game against the Houston Texans in 2010, when the loudmouthed Finnegan toed way too close to the line with Texans All-Pro wideout Andre Johnson. After a few plays of some extracurricular activities between the two — namely pushing and shoving — the final result was an all out fistfight, with both Cortland Finnegan and Johnson swinging at one another before being separated and tossed. Take a look at the fight below.

Even now it’s insane to think that Johnson not only swung but landed at least two solid punches on Finnegan. Like, damn, the fight still holds up even after all these years, and, hands down, is one of the wildest brawls between two players we’ve ever seen in the NFL.

Well, after that now famous Cortland Finnegan-Andre Johnson fight came some fines, with both players getting a hefty $25,000 fine. While the Titans cornerback presumably paid his out of his own pocket, the Texans wideout apparently had a little help from other players around the NFL, as they, too, actually hated Finnegan so much that they chipped in.

That’s what recently retired quarterback Matt Schaub — who was Houston’s starter that game — said on Barstool’s Pardon My Take, with the signal-caller recounting how the two Pro Bowlers came to blows. Take a look below.

“That was a long time coming. That was probably like two or three years boiling and it came to a head that game. … Cortland was talking to our sideline and Andre just had enough,” Schaub recalled. “It takes a lot to rattle Andre Johnson, but you could tell (it was coming) in the huddle. He was telling the official when we were getting into the huddle before that play and looked at them and said, ‘Something’s about to happen.’”

Schaub said the Texans called a running play, and the next thing he knew Johnson was throwing haymakers at Finnegan. Johnson was fined for the incident, but Schaub says so many players around the NFL disliked the former cornerback that they helped cover the cost of the fine.

Man, that’s… something, isn’t it? The fact that other NFL players were so happy to see the Titans cornerback get pummeled really goes to show just how much he was disliked around the league. The Cortland Finnegan-Andre Johnson fight probably didn’t need to happen to confirm that, but, as other guys allegedly offered to pay Johnson’s fine, it sort of did.