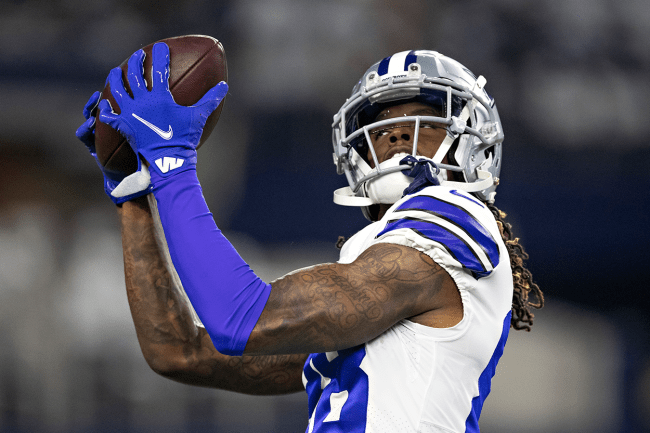 CeeDee Lamb is only 23 years old and apparently he isn’t done growing. The Cowboys receiver recently spoke about his offseason and shared that he has not only put on some weight, but also some height.

Lamb, who was drafted with the No. 17 overall pick in the 2020 NFL Draft, has quickly become a crucial weapon in the Dallas offense. And now that Amari Cooper is in Cleveland, the former Oklahoma Sooner is the definitive WR1. His name will be atop the depth chart and he will be the top target alongside Michael Gallup, James Washington, Dalton Schultz, Simi Fehoko and Jalen Tolbert.

As he enters his first year as the No. 1 guy, Lamb is a lot bigger than he was just six months ago.

During the 2021 season, Lamb was listed at 6-foot-2, 197 pounds. While it was never an issue for him in terms of production, there was room to put on some weight. He could easily play closer to 210, and that is exactly where he is entering 2022— give or take.

Lamb spoke with the media on Wednesday and shared that he gain a half an inch during the offseason. He also added 10 pounds of muscle, bringing him to about 207.

In regard to the fact that he is the top receiver on the team, Lamb also shared that he is more than ready to step up.

Cowboys WR CeeDee Lamb said he grew half an inch and gained 10 pounds of muscle this offseason.

On if he’s ready to take over as the team’s No. 1 WR: “I’ve been ready. That’s just me and my competitiveness. That’s in my nature. I’m always ready for my name to be called.” pic.twitter.com/iZg3WI8krm

Coming off of a career, 1,000+ yard season last year and is slated to explode this fall. Maybe that extra 10 pounds will help him take things to the next level.