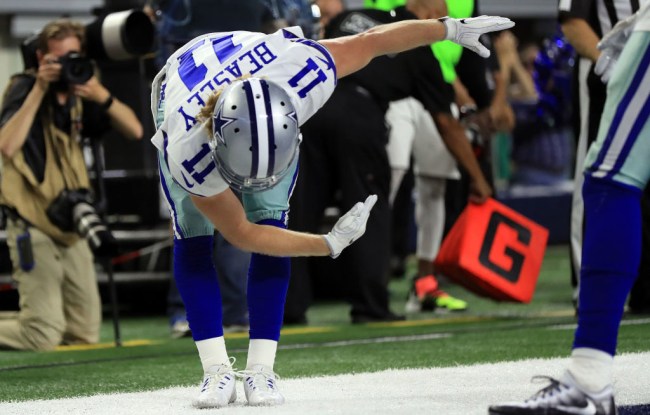 Raise your hand if you knew that Dallas Cowboys wide receiver Cole Beasley was a rapper. Everyone with your hand up, you’re all lying. There is no way any of you knew that the 28-year-old from Houston, Texas could spit bars.

That being said, he actually can do just that, because he just dropped his first rap single called “80 Stings” and remarkably, it’s quite good.

Not only that, Beasley even started his own record label, ColdNation Records, to release his music. Here’s a copy of the press release his company sent out on Tuesday announcing his debut single, which will be part of an album he’s releasing this spring.

Check out some of these lyrics from “80 Stings.”

Labels all gonna want to sign me;
ColdNation records first signed me;
Independent label owned by me;
So I’m taken like I’m Liam;
Neeson’s daughter but by me;
I’m bossed out;
But Sunday, Jerry’s boss now when I ball out;
I’m a dog when Dak get the ball out;
Pull the sauce out;
Pour the sauce on em that’s too much;
Good wife that’s too clutch
Without a backbone you can’t do much
Making moves like food trucks
Getting to the bread til it’s chewed up
And my bank accounts look juiced up.
Who knew? Huh. White dude rapping too tough