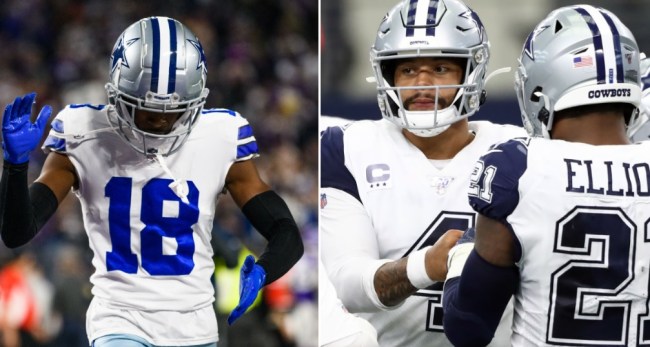 Cowboys’ Damontae Kazee may have broken NFL locker room code while trying to get himself out of trouble.

On Wednesday, TMZ released a video showing Kazee telling a police officer that he was on his way home after partying with teammates Dak Prescott and Ezekiel Elliott during a DWI stop back in October.

Dallas Cowboys safety Damontae Kazee told a cop he had been with Dak Prescott and Ezekiel Elliott hours before his DWI arrest, police video shows. https://t.co/10dheyNZIm

Dallas Cowboys safety Damontae Kazee told a cop he had been with Dak Prescott and Ezekiel Elliott hours before his DWI arrest … saying he had partied with the two just before getting behind the wheel.

It’s all in new police video, obtained by TMZ Sports, which reveals Kazee name-dropped his two superstar teammates after he was pulled over in the Dallas area back on Oct. 19 at around 3 a.m.

Kazee — who seemed to be slurring his words — said “my bad” … and then explained he had been with the Cowboys’ quarterback and running back earlier in the evening.

“I was just with Ezekiel Elliott and Dak Prescott and we were just having fun — went out,” Kazee told the cop.

The video goes on to show Kazee getting arrested after failing several field sobriety tests.

Cowboys fans immediately called out Kazee for “snitching” on Prescott and Elliott during his DUI arrest.

You just snitching for no reason bruh https://t.co/coLlzYLmod

It be ya own teammates lmao please cut this rat @dallascowboys https://t.co/hlHwthnIU9

He a snitch and I’d be paying him a visit in the locker room https://t.co/opWTfPIL5h