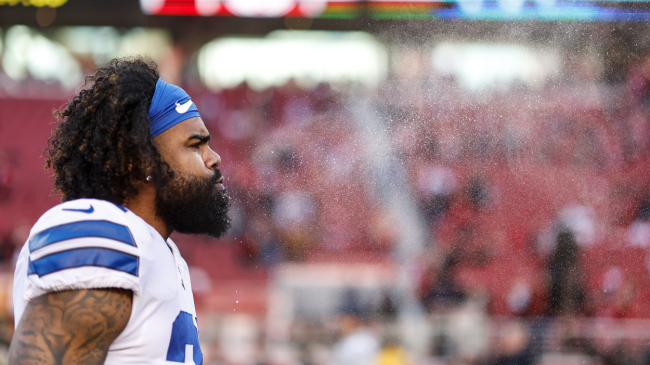 Ezekiel Elliott might’ve just played his last game as a member of the Dallas Cowboys. The star running back could hit the market this offseason.

If it is his last game with the team, Dallas play callers absolutely left him out to dry on his final play.

The Cowboys fell in the divisional round of the playoffs to San Francisco. The score was 19-12 as the offense took the field for one final drive.

Attempts to move the ball down the field failed miserably, leaving Dallas’s Super Bowl hopes hinging on a last gasp effort. Having 80 yards to travel on the last play, the Cowboys’ coaching staff drew up a trick play.

It ended well short of their intended goal.

It also left Ezekiel Elliott sitting on his backside when the final whistle blew. The offense lined up in an interesting formation for that last play, which saw their starting tailback playing center.

After snapping the ball to Dak Prescott, the running back was bull-rushed by a 49ers defender. Elliott was quickly pancaked and pushed to the ground.

That play had fans talking after the game.

One fan wrote, “Zekes last play as a cowboy going to be getting pancaked as a center.”

Another person posted, “I can’t stop laughing at the Cowboys’ final play.”

The reaction didn’t end there. A ton of notable sports media personalities also commented on the catastrophic final down.

This was laugh out loud hilarious. “Let’s run our play where Zeke gets annihilated.” pic.twitter.com/Fg6LURCO4X

It could be the last play that we see Ezekiel Elliott in a Dallas uniform. The rusher is technically still under contract, but the Cowboys could opt to release him and move forward with Tony Pollard.

Elliott has responded to the uncertainty, insisting that he wants to remain a part of the organization.

It’s clear that he’s not played up to expectation after signing a massive deal in 2019. The Cowboys have a potential out in 2023, but they’ll have to eat nearly $12M in dead cap space.

We’ll soon see how they feel about the ball carrier and his future in Dallas.