Tony Pollard May Have Cost Himself Lots Of Money With Injury 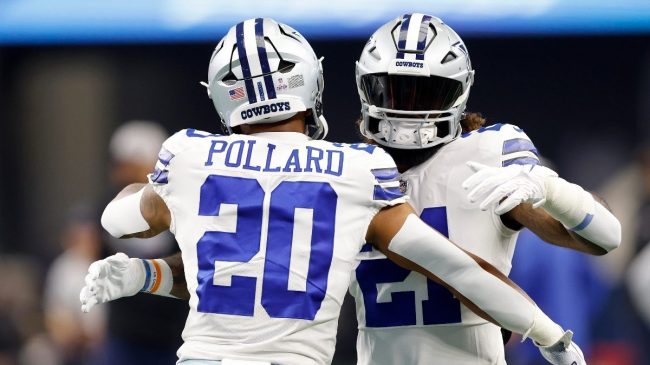 Dallas Cowboys running back Tony Pollard has proven himself as one of the most efficient running backs in the league. In fact, if Jerry Jones didn’t have a man crush on Ezekiel Elliott, he would be the feature back for one of the league’s best offenses.

Pollard was fantastic this year. He had 193 carries for 1,007 yards and 39 catches for 371 yards. But, for some reason, Dallas decided to give Ezekiel Elliott 231 carries even though Pollard was much more efficient.

And, he was supposed to be a big part of their Super Bowl push. But, Dallas lost last night to the San Francisco 49ers, 19-12.

CMC puts the @49ers ahead! #NFLPlayoffs

The final play that sends the @49ers to the NFC Championship! #NFLPlayoffs pic.twitter.com/Du5KruFQ3q

But, more importantly for Pollard’s financial future, he suffered a bad injury during the game.

After Mahomes yesterday another textbook high ankle sprain mechanism for Tony Pollard. This one appears worse, additional concern for fracture. Hip drop tackle again too – not always a “dirty” play but a technique with high risk of injury to ball carrier pic.twitter.com/1Tl78OFkPo

And, according to ESPN’s Adam Schefter, Pollard suffered a broken fibula.

More about Cowboys Pro Bowl running back Tony Pollard suffering a fractured left fibula that will require surgery, via @toddarcher.https://t.co/nX1j6ne77M

Unfortunately for Pollard, he is a free agent this offseason. And while, he should be ready to go by training camp, teams don’t love having damaged goods at running back. And, fairly or not, the 25-year-old is now seen as damaged goods.