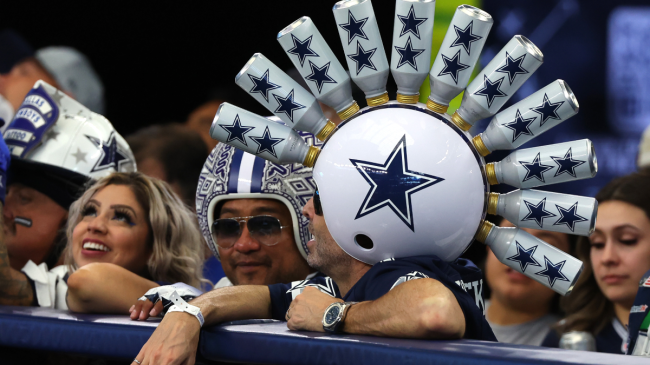 Dallas Cowboys fans are excited to have landed their first win of the season. After falling in Week 1 to Tom Brady and the Tampa Bay Bucs, the Cowboys upset the Bengals behind backup quarterback Cooper Rush’s 235-yard effort.

Dallas entered as a touchdown underdog despite playing in AT&T Stadium, but they jumped out to a big lead and held on to send the home crowd back happy.

In fact, one fan in particular is now going viral for his interesting form of celebration.

Cowboys fan rides horse through Walmart after win over Bengals

To celebrate the big win, one Dallas fan was seen riding his horse through a Texas Walmart, decked out in a Dak Prescott jersey and cowboy hat.

I mean, not only was this dude roaming the aisles on horse top, but he was getting some shopping done in the process. He even goes through the checkout line on saddleback.

A clip of the fan has now been posted to social media, and not surprisingly, it’s gone viral. Take a look at the initial reaction on Twitter.

One fan posted a clip that showed the horse outside in the Walmart parking lot along with the caption, “God forbid if the Cowboys win the Super Bowl.”

Lol. I walked past it after the game. pic.twitter.com/tJuREMtW6U

This person wrote, “The cowboys win next thing you see is a horse inside a supermarket.”

Another fan shared the same sentiment, saying, “Cowboy fans win one game & the next day they’re literally riding a horse in a Walmart,” after seeing the bizarre clip.

Dallas fans are certainly excited to land that first win of the year. Hopefully they don’t take the celebrations much further than this if the Cowboys win again next week.