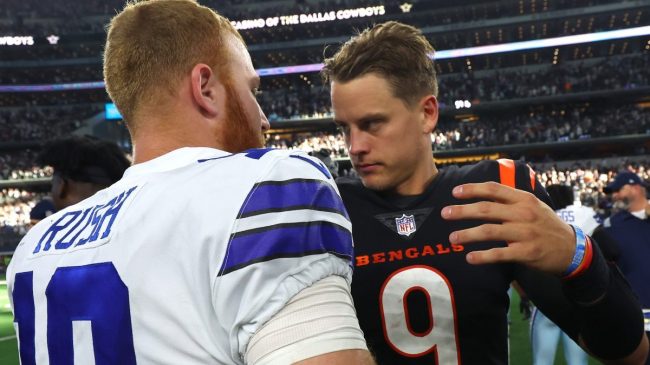 Michael Irvin is sippin’ on the Cooper Rush kool-aid.

The Cowboys’ backup quarterback is the talk of the town in Dallas after leading a game-winning drive over the Cincinnati Bengals.

Rush led Dallas 33 yards in just 57 seconds to set up a Brett Maher 50-yard field goal as time expired. Irvin, a Hall of Famer and former Cowboys great, was stoked about the victory.

But Irvin took his excitement one step further on Monday’s edition of ESPN First Take with Stephen A. Smith.

Rush’s stats against the Bengals were solid, but far from spectacular. He finished the contest 19-of-31 for 235 yards and one touchdown.

But his late-game heroics were enough for Irvin to name him his Week 2 NFL “Playmaker of the Week.”

.@michaelirvin88 has Cooper Rush as his top playmaker of week two 🤔

Irvin is no stranger to bold, oft-criticized takes.

The former star wide receiver predicted that Minnesota Vikings quarterback Kirk Cousins will win the 2022 NFL MVP Award prior to the season.

While many laughed at Irvin for his take, the early returns were positive. Cousins threw for 277 yards and two touchdowns in a win over the Green Bay Packers in Week 1 and Irvin immediately took a victory lap.

He’ll have a chance to double down on that take should Cousins continue his strong play. The veteran quarterback leads the Vikings into Philadelphia to take on the Eagles in one of two Monday Night Football games in Week 2.