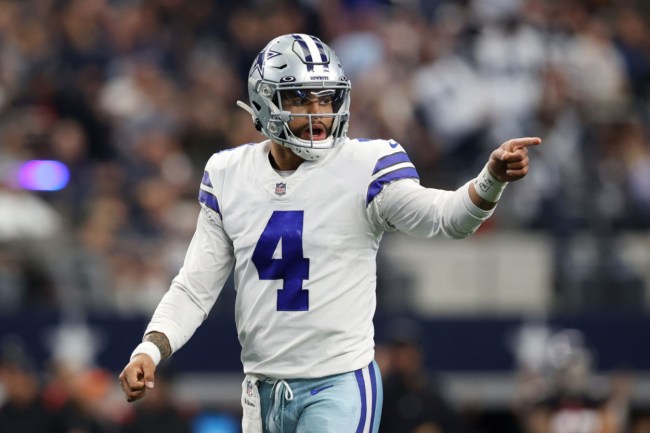 As per usual, this season has been an up and down one for the Dallas Cowboys. After reeling off six straight losses earlier in the year Dallas has come back down to Earth, and many are pointing directly at Dak Prescott as the reason why.

The Cowboys still sit firmly atop the NFC East at 9-4 but have gone 3-3 over their last six games, including home losses to both Las Vegas and Denver.

While Dallas does find itself on a two-game winning streak after road wins against the Saints and Washington Football Team, owner Jerry Jones knows the team isn’t clicking at its full potential.

During an appearance on 105.3 The Fan, Jones was asked if Prescott was in the middle of a slump. Jones began by saying he didn’t want to label it a slump but quickly admitted that his franchise QB was struggling a bit.

“I don’t want to say that, slump, but that’s probably fair,” Jones explained, according to ESPN’s Todd Archer. “But it’s such a multi-faceted evaluation that I would say our offense is definitely away from where we were playing 5 and 6 games ago.”

Dallas’ offense was rolling earlier this season scoring at least 35 points in four of its first six games, but the Cowboys have scored 30 or more points just once, in a loss to the Raiders, over their last four games.

During the team’s latest 3-3 stretch, Prescott has managed to throw eight touchdowns, rush for another, but throw six interceptions in the process.

Sounding the alarm at this point would be ridiculous with Dallas close to officially clinching a playoff spot, but heading into the postseason with an offense not playing at its highest potential could be worrisome.