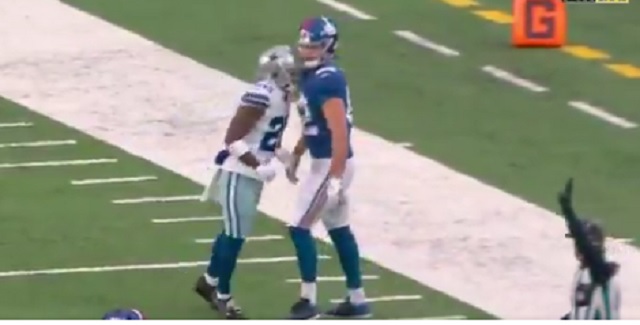 The Dallas Cowboys are fighting for their playoff lives and Jourdan Lewis isn’t helping the team by getting dumb penalties during the team’s game against the Giants.

After a play, Lewis randomly decided to headbutt Giants tight end Kaden Smith right in front of the ref.

Jourdan Lewis what are you doing!?! pic.twitter.com/rWLmEV3T5M

Lewis was hit with a 15-yard penalty but was not ejected. Cowboys fans were not happy with Lewis’ headbutt.

You bench Jourdan Lewis for that kind of idiocy.

Jourdan Lewis… bro… that ain't it. That … ain't…. it. Too much on the line for that kind of mental error.

What the hell was that from Jourdan Lewis? McCarthy should bench him right now.