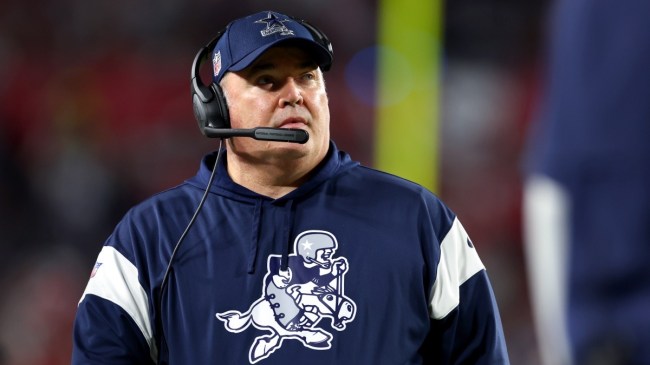 Everyone loves to laugh at the Dallas Cowboys. While they may have been “America’s Team” in the past, they have been more like “America’s Punching Bag” for the past 27 years.

That’s how long it’s been since the Cowboys have played in an NFC Championship game. After being arguably the NFC’s best franchise for the thirty or so years after the merger, you can count their playoff wins on the one hand since.

Dallas Cowboys fans thought this could be their year. After all, it’s a pretty good roster. The team was dangerous on both sides of the ball, Micah Parsons emerged as arguably the league’s premier defensive player, and the offense was chock full of weapons.

But, a Dak Prescott meltdown left the team in dire straits at the end of the game, trailing 19-12. So, head coach Mike McCarthy and offensive coordinator Kellen Moore had an absolute galaxy brain idea for a last-ditch play.

The final play that sends the @49ers to the NFC Championship! #NFLPlayoffs pic.twitter.com/Du5KruFQ3q

What in the world was that? It brings back the memory of this.

Not good. And, twitter was out in full force with funny tweets and memes.

Y’all, I’m over here crying 😭 LAUGHING again…What are the @dallascowboys doing on the LAST PLAY of the game? 🤷🏾‍♂️ I have NO IDEA pic.twitter.com/QySyxb422K

How bad was that last play by the Dallas Cowboys?

The alternate angle of that last Cowboys play is wild pic.twitter.com/UmUFY2eIEB