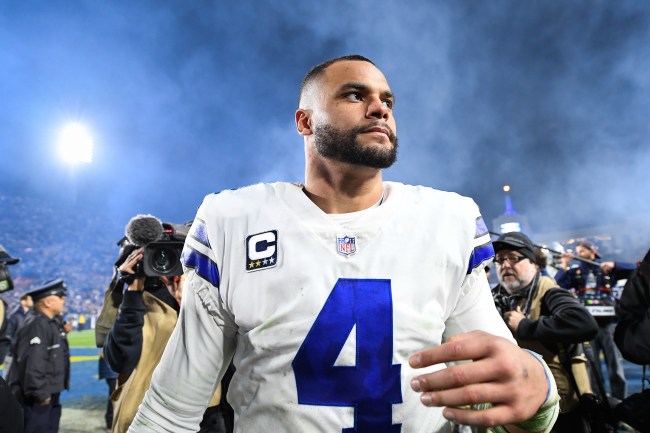 In a four-part Instagram post, Prescott called for justice for George Floyd, the Minneapolis man killed at the hands of police officer Derek Chauvin last week, and explains how plans to help end systematic racism in the country.

“As a Black Multiracial American, I am disgusted and unsettled!”. “I am as optimistic as they come! I try to understand and find the positive in every aspect of my life.

“My MOM left me the word Faith to live out for a reason. I believe in the good in each individual and this country as a whole! To be humble and to see every man and woman as the same takes humility and accountability.

“As our communities take action, protesting and fighting for the justice of George Floyd and every black life, I am with you!”

While Dak says he supports with protests taking place across the country after the death of Floyd, he goes on to say that he doesn’t agree with the looting and violence taking place.

“I have viewed these protests and riots in our streets as a form of strength and an attempt to show we as Black people have rights that aren’t perceived equally as our counterparts.

“These riots have caused consternation and confusion in an already Crisis-driven world,” I do not believe looting or that violence is the answer,” “I have personally struggled, along with our country, since the Coronavirus pandemic began. Anxiety became something I had to understand and battle with as I searched for a bigger purpose without the game of football around. I wanted to help, make a change, be a part of something that fixed the pandemic. I lost an Idol, my brother. He and I shared the same mission: FIND A BIGGER PURPOSE!”

Dak ended his post with a heartfelt message for police officers.

“I have the utmost respect for those of you with a passion for protecting and serving your communities. When you chose to wear the badge of a police officer, you pledged to PROTECT life and property through the enforcement of our laws and regulations. How can you claim to uphold the law when those within your own ranks don’t abide by it? You need to hold your own accountable! Each of you are as guilty as the men who stood beside Derek Chauvin if you do not stand up against the systematic racism plaguing our police forces nationwide. TAKE ACTION!”