Cris Collinsworth Apologizes For His Comments About Female Steelers Fans 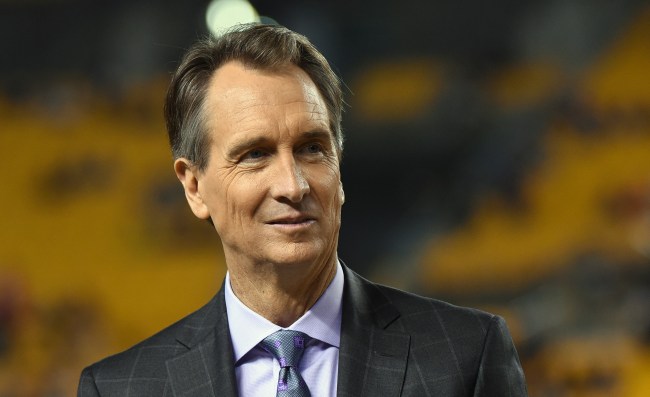 In case you missed it, because you were, you know, at your job, during Wednesday’s game between the Baltimore Ravens and Pittsburgh Steelers, Sunday Night Football (Wednesday Afternoon Football?) analyst Cris Collinsworth caught a lot of flak for some comments he made about female Steelers fans during the broadcast.

Collinsworth, who spent six days in Pittsburgh waiting for the game to be played, said he had the chance to speak to a lot of Steelers fans and came away very impressed with how knowledgeable they are, especially the women.

“Everybody’s a fan, in particular, the ladies that I met! They had really specific questions about the game, and I’m like, ‘Wow,’ you’re just blown away by how strong the fans are here in this town,” said Collinsworth.

Also Chris Collinsworth was blown away that the women in Pittsburgh had really specific questions about football pic.twitter.com/eskujaRsKn

Still shaking my head that Collinsworth was shocked that women know and watch football and that we “have specific questions about the game”. Someone please tell Cris we do have TVs in the kitchen. 😏

Soooo, before the day was over, Collinsworth felt the need to issue an apology for his on air statement about female Steelers fans.

“Today on our broadcast I made reference to a couple of women I met in Pittsburgh who so impressed me with their football knowledge that I wanted to tell their story on the air,” Collinsworth wrote on Twitter. “I know the way I phrased it insulted many. I’m so sorry.

“What I intended as a compliment to the fans of Pittsburgh, became an insult. I’m sick about insulting any fan, but especially female fans and journalists. I know first hand how much harder they have to work than any of us in this industry. I was wrong and deeply apologize.”

Reactions to his apology were, as always, mixed.

I’m a female Steeler fan and I never thought you meant to insult anyone. I took it as a compliment and got what point you were making. It was a nice story and chalk it up to mental fatigue from the week that was. No apologies needed

It was only an insult to ppl who wanted to be insulted. Always have to remember social media warriors aren’t real life

Hiring a single female analyst at Pro Football Focus might be a good start? Or are they better suited for IT, where they can sit quietly?

The fact that someone made you write this is just dumb

Cris you complimented the women of Pittsburgh by telling us how well they knew the game. The only angry people are the people who don’t even watch the game

Thank you for recognizing that words matter and for your apology. Interesting though, that the majority of those who responded negatively to your making a sincere apology for a mistake are men. That should tell all of us something rather important.