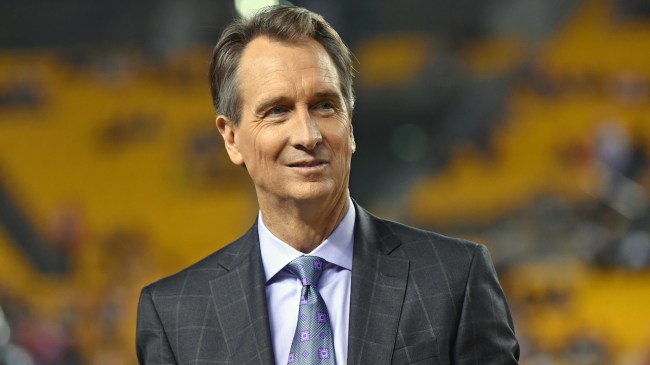 Sometime over the course of the last five years or so, the internet decided en masse that Sunday Night Football analyst and former Cincinnati Bengals wide receiver Cris Collinsworth sucks. And, frankly, who am I to disagree?

Between his awkward pregame slide-in and bite-lip combo move to his generally biased commentary, the only reason Collinsworth isn’t the most disliked football commentator is the United States is because of the painfully brutal Monday Night Football team of Booger McFarland and Joe Tessitore.

Unfortunately for all of us, though, Collinsworth is a bonafide O.G. of both the football and the commentary game, meaning the only way we’ll ever get rid of him is if he decides to walk away himself.

So, while we may not be able to purge Collinsworth from our sports-watching lives, we can certainly still make fun of the guy, especially when an extremely cringe-worthy video of him rocking a fake mustache and a blanket poncho in an effort to sling taco meat hits the internet.

Unearthed by the always-hilarious Back Afta This Twitter account — who is usually known for their Mike Francesa takedowns — a video of Collinsworth partaking in some questionable marketing has made its way onto the internet.

Slinging something called “J.T.M’s Beef Taco Filling”, Collinsworth can be seen donning a fake mustache, a Mexican blanket poncho, and a sombrero as he preaches the gospel of J.T.M’s assuredly disgusting beef taco filling.

It goes without saying that this is the type of commercial that would never hit the airwaves in today’s day and age.

Since this #Bengals game sucks, I thought you might enjoy this 1989 commercial featuring Cris Collinsworth selling taco meat. pic.twitter.com/8cLoCEKk9c