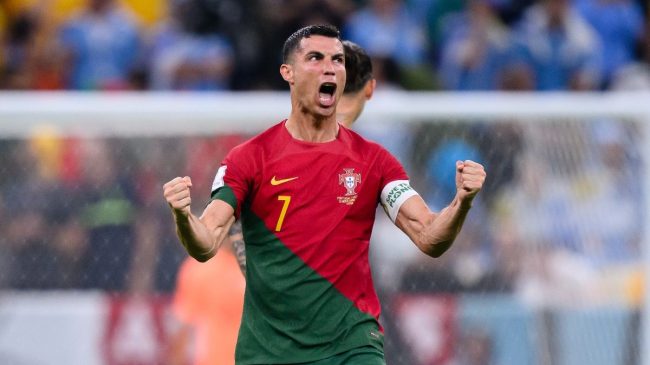 Portugal scored a magnificent goal to go up 1-0 over Uruguay in their FIFA World Cup match. However, Cristiano Ronaldo is receiving some flack for it. After going up and whiffing on his header attempt, the legendary soccer star acted like he scored the goal. When in reality, his teammate Bruno Fernandes records the point scored.

FOX Soccer shows the replay where you can clearly see the ball missing Ronaldo’s head. Although he did put in a strong effort to drill the ball into the back of the net, it was totally unneeded. Even so, Cristiano Ronaldo acted as if he was the one who scored the goal instead of Bruno Fernandes.

Does Ronaldo get a touch on this goal? pic.twitter.com/SdW0v6NjCZ

Fake a penalty
Fake a goal
Goat for a reason our Penaldo Bhai!

If u need more reasons why ronaldo is so unlikeable compared to Messi! That goal summed it up- a shithouse even to his own teammates trying claim a goal not his! Messi does not roll like that #ronaldo #Messi #Portugal #PORURU

Maybe Ronaldo can partake in an acting career once he finishes playing soccer.

Ronaldo can lie ooo 😂 He knows the goal was scored by Bruno Fernandes yet still he went ahead to celebrate like he scored 🤣😂🤣The Goat 🐐 😂 from Portugal pic.twitter.com/UJqYPyDjJt

Hey, at the end of the day, the goal counted and that’s likely all Portugal cares about. Maybe Cristiano Ronaldo will talk about his non-goal after the game. But, we’re just glad Bruno Fernandes is getting the credit he deserves.