Cristiano Ronaldo Is Being Called A Flopper After World Cup Goal 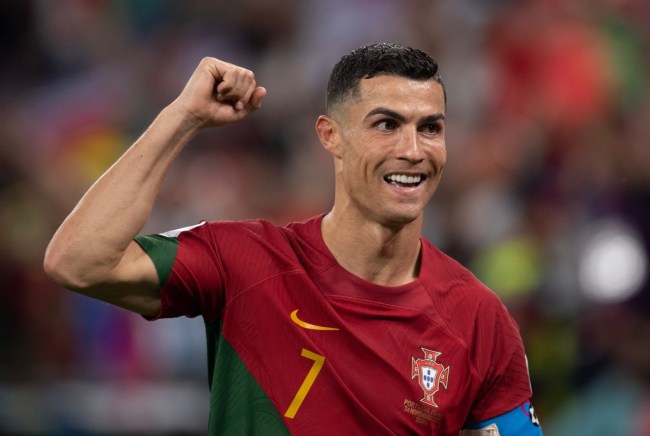 Cristiano Ronaldo has been in the news for all the wrong reasons lately. The embattled Manchester United forward was released by the club this week amid his criticism of the club and manager Eric Ten Hag.

But, the striker had to move on, as he is leading Portugal into the 2022 FIFA World Cup for the fifth time in his career. In their opening match on Friday against Ghana, he was looking to make history and be the first to score in five World Cups. He got it done, but not without controversy.

Cristiano Ronaldo drew a controversial penalty and scored in

Ronaldo looked to have scored in the first half on this play, only for the goal to be ruled out for a foul.

Ronaldo was not happy after this goal was called off 👀 pic.twitter.com/9q9pQgs26m

But, that call may have helped Cristiano Ronaldo score later. He drew a penalty on a ticky-tack call. Some think it was a flop, though.

Do you agree with the call? pic.twitter.com/ZYTaNTlnfE

Ronaldo scored the penalty, as he almost always does.

With this goal, he becomes the first men's player to score in five different FIFA World Cup tournaments 🔥🇵🇹 pic.twitter.com/PxWP4Z5z8o

He used his trademark celebration, too. But, later on, Ghanaian goalscorer Osman Bukari also hit the celebration.

The entire stadium hit SIUUUUU at the same time 🔥🔥🔥 pic.twitter.com/T4nG6LQyST

Osman Bukari hit the SIUUU after scoring against Portugal 👀 pic.twitter.com/Xb0CVu1n4l

There were lots of takes on whether it was a deserved penalty.

This popular account thinks it was not a deserved penalty, and that it was a flop by CR7.

No, that shouldn't have been given as a penalty, Ronaldo dived pic.twitter.com/cyMmke2Mcx

Fake penalty for Ronaldo and Portugal.

We have lost but just reminding everyone that there was a fake penalty in the World Cup to help Portugal and Ronaldo score.

Again VAR is a joke! Defender clearly takes the ball. What's going on with this World Cup last two days

Ronaldo diving for a penalty in a World Cup? That’s nasty business.

But, when you compare it to the goal Cristiano Ronaldo scored earlier that was ruled out due to a soft foul, I think it’s a penalty.