Cristiano Ronaldo OBLITERATED A Steward With A Warmup Kick, But He Made Good On The Accident 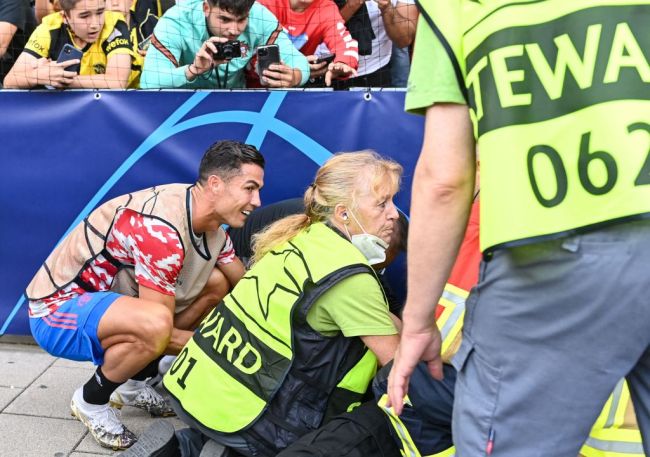 Cristiano Ronaldo might have one of the best free kicks in the world, but he isn’t always perfect, as an unsuspecting woman found out on Tuesday.

The Manchester United star, in his second game back with the British club, took an errant kick from beyond the box in warmups. It flew wide over the crossbar and smacked a steward directly in the back of the head.

After a short moment of initial shock, the steward collapsed to the ground holding her head. Video from the scene shows that Ronaldo immediately rushed over to the scene.

He even took the time to make sure that she was okay before heading back out to the pitch.

After receiving medical attention from the team on staff and getting some words of encouragement from CR7 himself, the security guard was back to her feet in no time.

In fact, her night ended up finishing better than Ronaldo’s.

Manchester United lost 2-1 to BSC Young Boys of Switzerland, which was a shock to everyone. The security guard, on the other hand, received Ronaldo’s game-worn jersey.

Cristiano Ronaldo gave his shirt to the steward he accidentally hit with a ball when warming up 💙 pic.twitter.com/2ChZgBWy8V

While the errant free kick may not have boded well for Ronaldo’s accuracy during warmups, he was the only player on the Man U side who was able to find the back of the net in the match.

Despite the loss, Ronaldo’s gesture of taking the shirt off of his back made the night a success, because the smile of the steward was priceless.

You won’t see a steward with a bigger smile today after she received @Cristiano's shirt 😍 pic.twitter.com/Q22Bc9tr0O