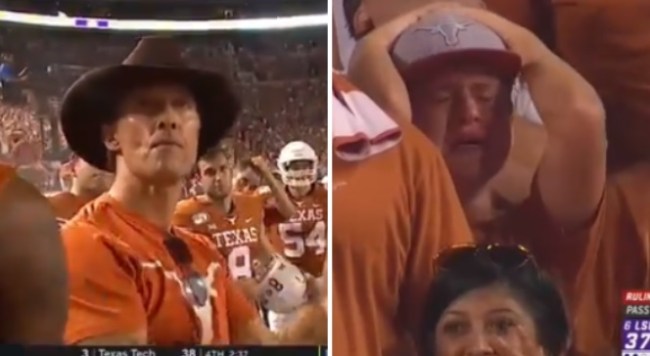 Another college football season is underway and Texas is apparently still not back.

While UT put up a good fight against a top-ranked team in LSU they still took the L and fans were very much in distress.

Late in the fourth quarter after it was apparent the game had finally slipped away from Texas, UT superfan Matthew McConaughey was seen cursing on the sidelines.

ESPN’s cameraman then focused on a kid in the stands who was crying and cussing up a storm.

Crying Texas kid cussing up a storm is your college football meme of the yearpic.twitter.com/3rfdbO06Of

Of course, the crying Texas kid got the meme treatment right away.

When they tell you that Texas is back…but they're not really back. pic.twitter.com/FsVDMiVzWJ

Welcome to the world of Internet memes kid.#LSUvsTexas #Texas #Longhorns

That crying Texas kid is going to be a staple of the OU fan base for generations. Kid cemented his place in history tonight tbh.