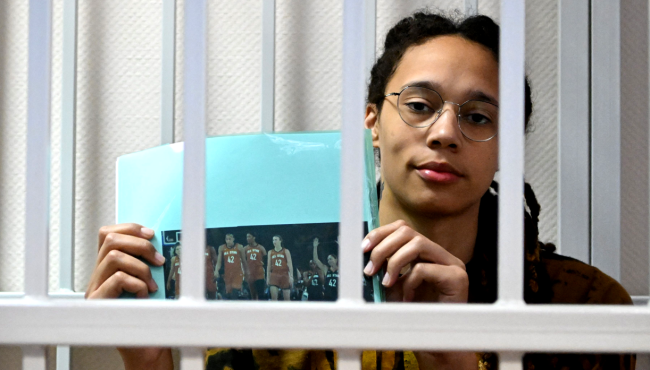 The Brittney Griner situation has, unsurprisingly, become a bit of a hot button issue.

The WNBA star has been held in jail in Russia since mid-February after police there claimed they they found traces of hashish oil in her luggage at a Moscow airport.

During a recent hearing on her case, Griner pled guilty to the charge and told the court that she “didn’t want to break the law.”

The United States government has classified Griner as “wrongfully detained” based on the amount of time she has been held over such a minor offense.

Responding to LeBron James explaining why he said that he isn’t sure if Brittney Griner should want to return to America once she gets released, Schilling wrote on Twitter, “I know this may seem like a stretch. But something like 300 million people understand “OBEY THE F—ING LAW”, why is that such a challenge? And why on earth should she NOT pay the penalty for breaking another country’s laws?”

The 2001 World Series MVP also stated, “She, as far as I know from every quote of hers, has NEVER denied committing the crime, not once.”

Griner, who has another hearing scheduled for next week, faces a punishment of up to 10 years in prison for “large-scale transportation of drugs” (having vape cartridges containing 0.7 grams of cannabis oil in her luggage).

Schilling’s latest tweet is the result of arguments he has had with numerous people on Twitter about Brittney Griner’s situation.

Really? Are you quoting American law here? You aren’t are you? Because she was arrested in Russia after breaking Russian law. Corrupt ass country but they (American athletes) are always lectured about “when in Rome do as Romans do”. This wasn’t her 1st go around with customs https://t.co/8VWmMeIWZ8

One more thing NO ONE will tell Americans. Professional leagues, ANNUALLY meet with their athletes. They explain the complexities of playing in another country, giving you a laundry list of things that are FAR different and warnings on how to avoid going to prison. #obeythelaw

He does have a small point there. Griner has played for the Russian team UMMC Yekaterinburg every year since 2016. The rest of what he wrote is certainly debatable.

The taxpayers in RI are waiting for you to obey the law! Where did our tax money go, besides in your pocket?

Can you get cte playing baseball?