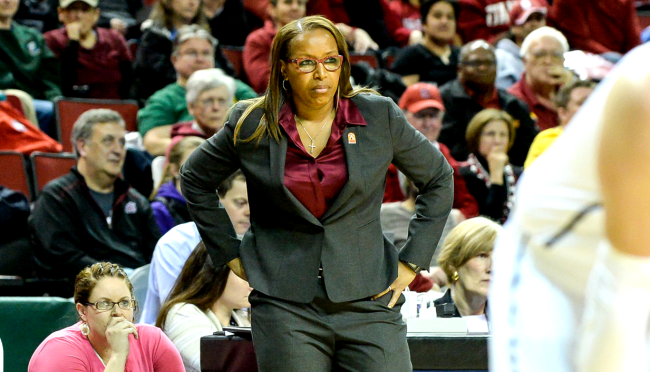 Cynthia Cooper-Dyke is arguably the greatest female basketball player of all time. She’s a two-time NCAA champion, four-time WNBA champion (winning four Finals MVP Awards), won a gold medal at the 1988 Summer Olympics, and has been inducted into the Women’s Basketball Hall of Fame as well as the Naismith Memorial Basketball Hall of Fame (the first WNBA player to receive the honor).

As a coach, she won the Colonial Athletic Association (CAA) Coach of the Year Award in 2011 after leading the UNC-Wilmington Seahawks to a 24-9 record. She has also been the head coach of women’s basketball at Prairie View A&M, USC, and Texas Southern (twice), as well as the WNBA’s Phoenix Mercury. She has a career record of 251-188 in college and 19-23 in the WNBA.

Last year in the middle of the season during her second stint as head coach of the SWAC’s Texas Southern Tigers, players on the team were informed by the university’s student conduct coordinator that they were, from that point on, only allowed “limited-contact” with Cooper-Dyke, according to a disturbing new report by The Athletic.

As part of that unusual new policy, Texas Southern players were not allowed to have one-on-one meetings with Cooper-Dyke and could not communicate with her “via text, phone, social media or email” as the school conducted “a safety-risk assessment.”

Later, that policy was extended to two assistant coaches as well. The order was so limiting that the coaches weren’t even allowed to snag rebounds for players practicing their shooting. Outside of practices and games, there was to be absolutely no contact whatsoever.

The reason for the no-contact policy was due to a Title IX investigation over allegations that Cooper-Dyke used “overt sexual language with her players, in ways that many found to be inappropriate, demeaning and degrading,” reports The Athletic. The allegations, it turns out, were not limited to just Texas Southern players, but had also been made by former players at UNC-Wilmington and USC.

“Nobody has said anything or done anything, just passed her off to the next school,” one former USC player told The Athletic. “This woman mentally and emotionally terrorized us.”

At Texas Southern, when she was told that one of her players who had been diagnosed mental health issues was depressed, Cooper-Dyke reportedly responded, “No, she will be all right, she just needs some d–k, that’s all.”

She also reportedly told a player who was doing squats, “You got a fat ass and I can tell you like to ride some d–k.”

An investigation conducted by The Athletic revealed “similar allegations that, for at least a decade, Cooper-Dyke routinely used overt sexual language with her players, in ways that many found to be inappropriate, demeaning and degrading.”

At UNC-Wilmington, Cooper-Dyke reportedly spoke often about her own or her players’ sex lives. She also reportedly used excessive punishment drills that at one point caused a player to vomit repeatedly and rubbed the the skin off her knees and shoulders. This same player said Cooper-Dyke made her feel “extremely suicidal” before finally quitting the team.

While at USC, Cooper-Dyke reportedly named one of the team’s plays “hot sex” and called some players “retarded.” She also allegedly pressured injured players to play, kicking one player off the team when she tried to explain to the coach that she couldn’t bend her knee.

Conveniently, on March 17, the second day of the 2022 women’s NCAA Tournament, Cooper-Dyke announced she was retiring. She had an Title IX hearing scheduled for April 6, but according to Texas Southern policy, the university can dismiss a Title IX complaint if “the Respondent is no longer enrolled or employed by the University.”

The case was dismissed.

Cooper-Dyke denied she had done anything wrong in a statement to The Athletic, but did apologize “for and regret any words used during the course of a spirited game or practice that offended or hurt someone.”

“Every time something comes across my Instagram, someone celebrating her, I want to scream,” said former USC player Thaddesia Southall. “She does not stand for what the WNBA represents. She does not stand for what they are trying to promote. This is a woman who demeaned us, who talked to us like we were not human. She made me hate basketball, and no one did anything to stop her.”