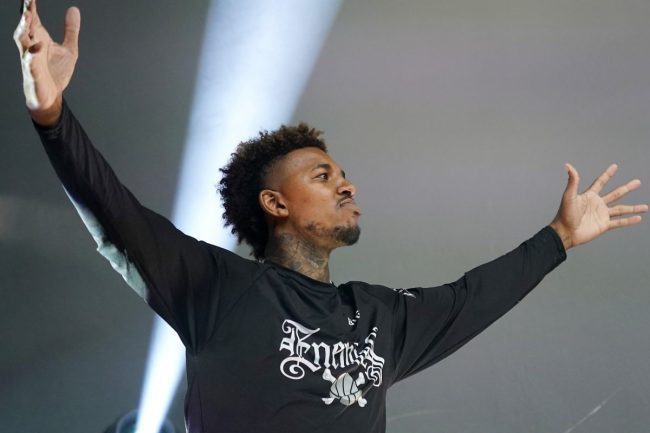 Nick Young recently said that he’d like to match up with D’Angelo Russell in the boxing ring. Swaggy P was asked by Sports Illustrated’s Chris Mannix about which NBA personality he’d like to square up against, and Russell was the first choice.

And it’s no wonder Russell was the first choice. The two have formed quite the rivalry since they played together in Los Angeles a handful of years ago. The former teammates suited up for the Lakers between 2015-2017. Unfortunately, the relationship ended after Russell secretly recorded Young admitting to cheating on then-girlfriend Iggy Azalea.

The two split once the recording was leaked. D-Lo was traded not long after the incident, but it doesn’t seem that Swaggy P has forgotten.

After the interview with Mannix went public, Russell had a few things to say about Young, too. He fired back with his response on social media.

D-Lo fires back at Swaggy P

After hearing about Swaggy P’s desire to match up with Russell in the ring, D-Lo posted the following tweet.

My name keep dude relevant, and I’m going to grave with “I ain’t do that shit”#CarryOn

My name keep dude relevant, and I’m going to grave with “I ain’t do that shit.”

Russell, who’s still in the league, quipped that Young will do anything to stay relevant. Swaggy P has been out of the NBA since 2019.

D-Lo averaged more than 18 points per game last year with Minnesota. Young might have the free time to think about his past rivalries in the NBA, but Russell is still playing at a high level.

In other words, it might be a while before we’re able to see this boxing match on the schedule.