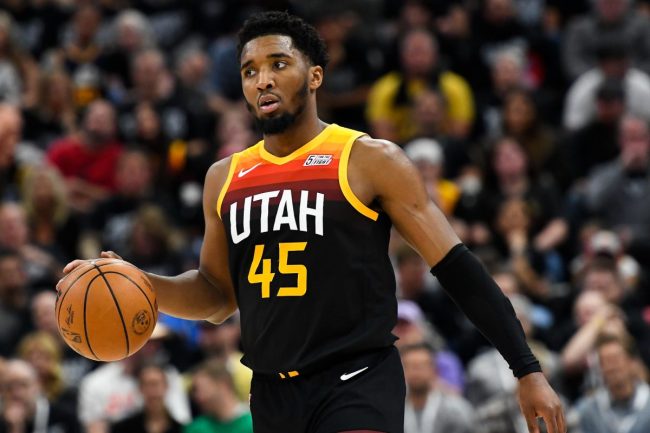 NBA fans are not happy with D-Wade after a video clip of the former Heat star surfaced seemingly showing his desire to get Jazz star Spida Mitchell to Miami. Wade, who played 15 seasons with the Heat, is also a minority owner in the Utah franchise.

Mitchell’s future in Utah has been undetermined. The team offloaded Rudy Gobert after an offseason tiff between he and the Jazz’s star player, but now it seems that the team could get rid of both. Mitchell is apparently not happy in Utah and could be looking for a way out.

The Heat have been rumored as a potential landing spot for Spida, though it was reported that a previous trade offer from the organization wasn’t enough to sway the Jazz.

Now, those Heat rumors are gaining even more steam as a viral video clip of Dwyane Wade seems to infer that the former NBA star wants to get Mitchell to Miami.

A video clip of D-Wade has surfaced that shows him agreeing that he wants to see Spida play for his old team, the Heat. NBA fans on social media are immediately calling for tampering upon seeing the clip.

The video shows a fan asking Wade if he wants to bring Donovan to Miami. Wade replies, “Yeah.”

Was it all part of the plan?

pat sent him as a secret agent 💯 pic.twitter.com/Y0AmIUWX3E

Mission: Infiltrate Utah and get Mitchell to Miami

While it’s sparked some controversy, this is far from a smoking gun. It looks as though Wade is on about his 200th signature of the day and isn’t really even listening to what this fan is saying. He just answers, “Yes,” to appease him.

Hell, he could’ve been talking to someone else altogether.

Still, as is the case with social media, fans will run with the smallest tidbit. But we can all agree that the Donovan Mitchell trade talks have gotten a little juicier.