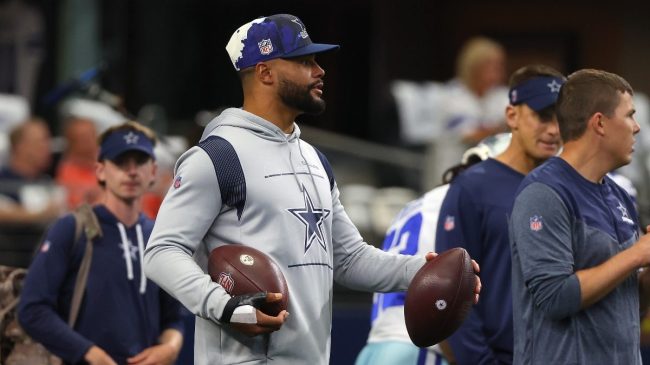 Dak Prescott suffered a thumb injury in Week 1 against the Tampa Bay Buccaneers. The Dallas Cowboys star quarterback is just 10 days out of surgery (as of this publishing). Many are concerned about his long-term health, despite Jerry Jones and the franchise being incredibly optimistic about his return. Well, it sounds like Prescott isn’t too far away from hitting the field again after all.

Dak Prescott Is Already Back On The Cowboys’ Practice Field

According to Michael Gehlken, “Dak Prescott is back on [the] practice field, gripping and throwing a training ball. Not throwing footballs yet or taking snaps, 10 days removed from surgery on right thumb fracture. But this is part of him building toward [a] quick return. As early as Week 4 or 5, [the] team says.”

That is an incredibly quick return to the practice field. The Cowboys quarterback isn’t messing around in his potentially soon return. Despite that, fans are concerned with Dak Prescott’s injury. Especially considering there is a risk he’s being rushed back onto the field.

Rushing him back is a terrible idea. Russ rushed back and was horrible last year.

Some Cowboys fans are hoping for the absolute best for Dak Prescott. If he’s truly healthy, Dallas could bounce back in a major way. If not, well, it could be detrimental to Prescott and the franchise long term.

And there are people like this. We have no words.

We’ll see how it plays out for Dak Prescott and the Cowboys. The franchise is hopeful their star quarterback is back under center by Week 4 or 5. If that’s the case, then Prescott very well could be a cyborg or something because that is a crazy quick turnaround from this thumb injury.