Jerry Jones Turns Up Pressure On Dak Prescott, Seems Like He’s Already Rushing The QB Back With Latest Comments 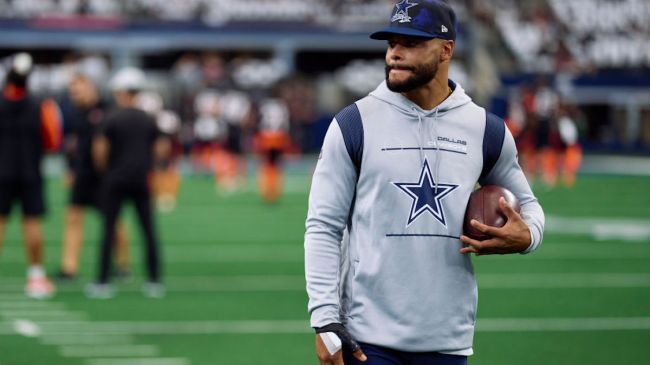 Despite the fact that the Cowboys’ offense looked far more functional with Cooper Rush in Week 2 than it did with Dak Prescott in Week 1 — some NFL fans even wondered if there’s a legitimate debate about who’s better — fans of Dallas are likely still eagerly awaiting the return of Prescott.

After initial reports indicated that Prescott would miss 6-8 weeks with a broken thumb (which would effectively end their season), that number was cut down to about four weeks following a successful surgery.

Now, apparently feeling good following their Week 2 victory over the defending AFC champion Cincinnati Bengals, Jerry Jones is also feeling quite optimistic about Prescott’s return as he’s now saying the former Mississippi State product could return for the team’s Week 4 matchup against the Washington Commanders on October 2. To be fair to Jones, though, he does admit that scenario is “very optimistic.”

Jerry Jones gives an update on Dak Prescott’s recovery, says the quarterback could return as soon as Week 4

“I don’t know that anybody knows [when he’ll be back]. But when he [gets enough strength in his hand], then you’ll probably see some real advancement in his timeline. I don’t know when that is. I do know that with a good airing out last week, everybody recognizes that he’ll be back sooner than later as far as the timeline,” Jones said in an interview with 105.3 The Fan.

It really could be a minimum of two weeks up here in my mind [Washington in Week 4]. Now, that’s very optimistic. But he’s got the kind of repair there that will allow him not to have a lot of fear of re-injuring it. It’s just a question of the grip. But it’s a big question.”

Given that the New York Giants and Philadelphia Eagles (who also look like one of the NFC’s best teams) are already 2-0, the Cowboys certainly can’t afford to fall behind if they want to win the division.

RELATED: Cowboys Find Themselves In A Catch-22 As Some NFL Fans Are Wondering If Cooper Rush Is Better Than Dak Prescott