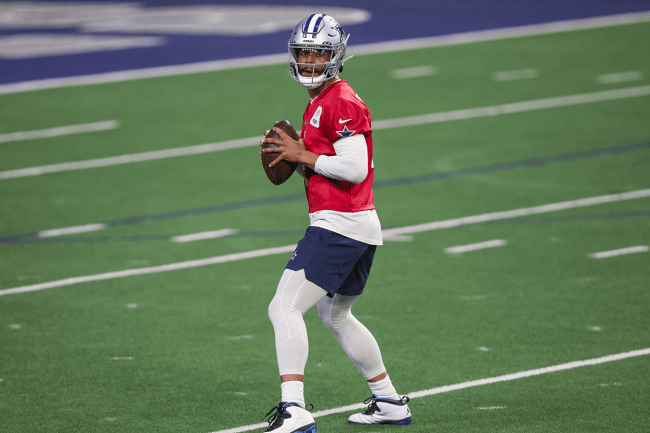 Dak Prescott was listed at 228 pounds on Dallas’ roster last season. It looks like he will be playing closer to 210 pounds in 2022 after he was spotted looking much leaner prior to training camp.

The 28-year-old quarterback held his annual kids camp earlier this month. Of course, Prescott had to teach the youth how to do his famous hip swivel warmup dance.

#DakDance – via https://t.co/XpImtegZQ4 … I asked @dak … and yeah, he really thinks it helps a kid QB! #Cowboys pic.twitter.com/H6Qy9UpQwW

As he  mentored the youth campers in attendance, it was very clear that Prescott had slimmed down. He looked noticeably thinner than he has in the past.

People, mostly reporters, in attendance took notice of Prescott’s new physique and asked him about it once the day had wrapped. The Cowboys quarterback said that he’s in the best shape of his life.

To get to that point required a new workout regimen and an overhauled diet. In addition, he says that he is moving much better after continuing to work back from a compound fracture and dislocation to his right ankle that he suffered in 2020.

“A couple of weeks out (from training camp) and I’m in the best shape that I’ve ever been in,” he said. “One, just because of my movement. I got a PT in the offseason — someone I’ve worked with throughout the last year. I’ve paid him, made him full-time, my guy. Whether it’s vacation or not, he comes with me. We work on these movements and stretches. I feel like, since the injury, I’ve trained more functional than I ever have. So, I see it in my body, I see it the way I move and how the ball is coming out.”

This, of course, is great news for the Dallas organization and its fans. The Cowboys reached won 12 games and reached the Divisional Round of the NFL playoffs last year. If Prescott is in better shape now than he was a year ago, the ceiling can only be higher, right?