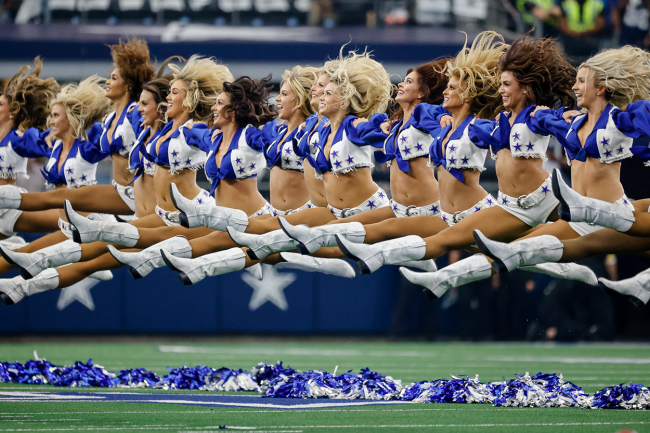 While choreographed dances continue to be a trend at weddings these days, very few people do it bigger or better than Kristin Westbrook. Westbrook, a Dallas Cowboy cheerleader, had her teammates join her at her wedding and what transpired was fantastic.

Westbrook, a New Mexico-native, joined DCC in 2019 after cheering for the University of New Mexico. She has since become a well-respected veteran on the squad and had the entire roster join her over the weekend.

Prior to the wedding, Kristin and the rest of the DDCs hit the beaches of Mexico for the bachelorette party. They are clearly like a family and there was no way that the team wasn’t going to be there.

A few months after enjoying some relaxation on the beach, Kristin and her husband Tyler got married at one of Walters Wedding Estates on Friday and quickly jetted off to their honeymoon in Puerto Rico. Before they did, Kristin and her teammates tore up the dance floor.

Rather than a corny flash mob or something outlandish and sloppy, the DCC squad absolutely rocked out to ACDC’s ‘Thunderstruck.’

Take a look at the Dallas Cowboys Cheerleaders’ wedding routine:

It is probably a safe bet that Kristin and her teammates knew that dance by heart. They have likely performed it time and time again on the field and knew it was the perfect routine. They didn’t miss a single step and they were in-sync from start to finish.

Obviously, these women had some training, whereas most viral wedding dancers do not. The DCCs are the best of the best and it shows.