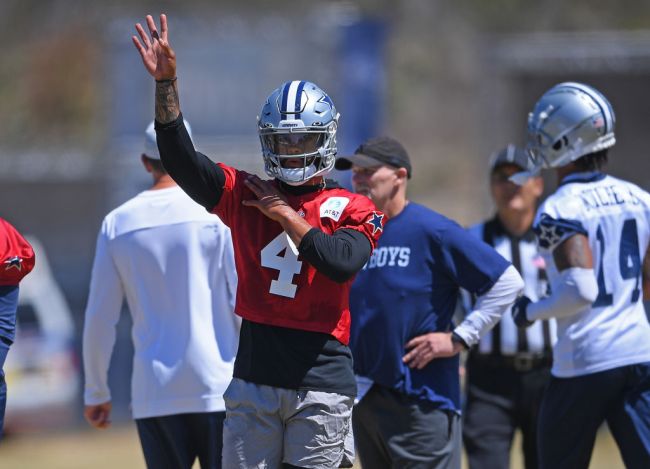 The Dallas Cowboys aren’t doing a good job of convincing fans that Dak Prescott’s shoulder injury is something they shouldn’t worry about.

Over a week ago, the Cowboys’ franchise QB has been limited to non-throwing drills because of a strained shoulder muscle” and there’s no timeline for his return to the field after he felt tightness and soreness that was described as “atypical.”

During last week’s Hall of Fame game, Fox Sports NFL analyst Troy Aikman said that he felt the team was lying about the extent of Prescott’s injury and that is worse than they’re letting on.

On Wednesday night the team announced that Prescott was receiving another MRI but assured fans “not to worry” because they still feel he’ll be available for the start of the season.

It's not a setback.
And it's not a reason to worry.
But QB Dak Prescott is planning on getting another MRI.

Cowboys fans immediately started freaking out in response to the team telling them not to worry about Dak.

I haven't put much stock in this Dak injury but this is starting to feel more and more like an actual situation here. 🤔 https://t.co/QPCohvUmQ0

Nothing to see here according to the team. Clearly, repeat MRI is not the norm. We went from day to day to eyeing Week 1. All along this was not a nothing injury. https://t.co/IxQu20pKrt https://t.co/2tBtB8OqF7

incredible to see an NFL team account perfectly replicate the way a doctor tries to play down his growing concern that a patient has untreated late-stage cancer https://t.co/9Q4Q1iRyvy

I too like to get MRIs when everything is going swimmingly.

I simply enjoy 30 minutes in a small tube while impossibly loud noises surround every inch of my being. https://t.co/uaaRui0FX6